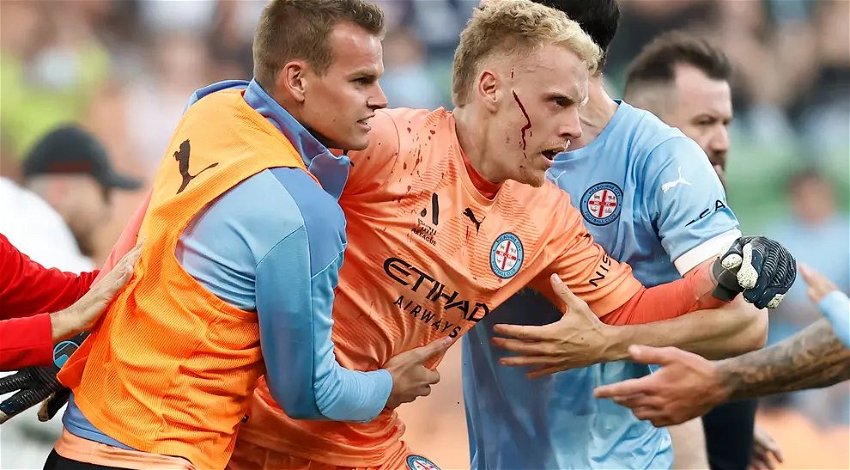 A spectator at the A-league derby game between Melbourne City and Melbourne Victory was abandoned after a spectator hit the City goalkeeper in the face with a metal bucket.

The game on Saturday, December 17 was a highly charged affair in which flares were lit and the pitch invaded.

Just 22 minutes into the game and with City leading 1-0, fans stormed the pitch with one running over to City goalie Tom Glover hitting him in the face with a metal bucket. With fans on the pitch and the goalkeeper injured, the referee abandoned the game.

City said that the 24-year-old had suffered a cut to his face and that it was “likely he had concussion.”

It is understood that referee Alex King was also hurt in the pitch invasion, however, it is not known what injuries he has sustained and how serious they are.

Protests by both teams of supporters had been planned for the match after the Australian Professional League (APL) announced that it would be selling the rights for the A-league grand final to Sydney. The deal would see the final held in Sydney for the next three years.

Both sets of fans had planned a walk-out for the 20th minute, but after flares were thrown the situation escalated with fans invading the pitch. A bucket used to collect the flares was then used to hit Glover before he and the refer ewer were covered in powder and smoke.

Absolutely unacceptable ugly scenes at 20 minutes at the Melbourne Derby. Glover got smashed by a bin by some fuckwit. Terrible. Game paused. As if Aus football couldn’t get any worse rn #MCYvMVC pic.twitter.com/zN8CMMEFVe

Football Australia (FA) issued a statement saying “strong sanctions” would be handed down after the “shocking scenes” adding that “Such behaviour has no place in Australian football, with a full Football Australia investigation to commence immediately.”

Both the clubs and the APL said they would cooperate with a FA investigation, the incident has been heavily criticised on social media with many calling for the person involved to be banned for life.

Walkouts were also staged at the Newcastle Jets game with Brisbane Roar and at the game between Central Coast Mariners and Sydney FC, however, they all went off without any hitch.

The appalling scenes in Melbourne bring into question the security at the venue as it does the intention of fans, with some if not more clearly setting out to cause damage culminating in the City goalkeeper being hit in the face.

Thank you for taking the time to read this article, do remember to come back and check The Euro Weekly News website for all your up-to-date local and international news stories and remember, you can also follow us on Facebook and Instagram.6