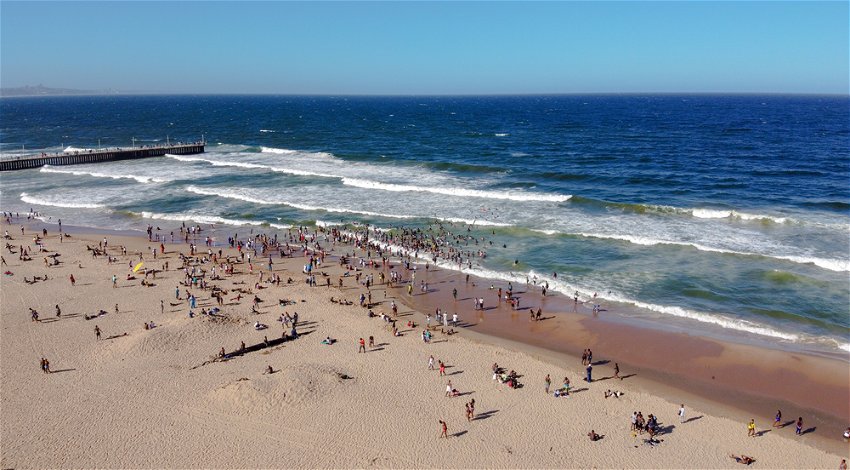 A giant wave that hit the popular beaches in Durban, South Africa, has left three dead after a marathon rescue effort involving 35 lifesavers.

According to authorities on Sunday, December 18, the freak wave that hit Durban’s North Beach on a busy summer left many people injured after they were dragged out to sea.

The three that died are said to have been crushed from the impact of the wave breaking on the shoreline.

Durban is South Africa’s busiest holiday resort and the Bay of Plenty is possibly the most popular summer destination for sea lovers attracting thousands to its beaches daily.

‼️3 Confirmed Deceased After Mass Drowning – North Beach,Durban. EMS responded to reports of a freak wave that swept a group of beachgoers against the pier causing multiple injuries. Unfortunately 3 including a teenager was amongst those who were declared deceased at the scene💔 pic.twitter.com/3FPemwjLCr

A spokesperson for the municipality of eThekwini, Msawakhe Mayisela told local media: “It took a team of 35 lifeguards to execute a massive rescue effort and another team of paramedics to attend to the more than one hundred people who were involved in the incident.

“Despite the best efforts of the emergency response team, three people lost their lives and others were taken to hospital. The municipality is saddened by the tragedy and sends its condolences to the families of the deceased.”

The incident is a major setback for the popular Christmas destination, with the beaches only recently opened following the floods earlier this year. Those floods resulted in sewerage being washed into the bay contaminating the water.

At the time the authorities declared a state of emergency with more than 400 people losing their lives and more than 40,000 being displaced.

The giant wave that left three dead is a blow to the city’s tourism industry which has already suffered from the numerous lockdowns during the pandemic.