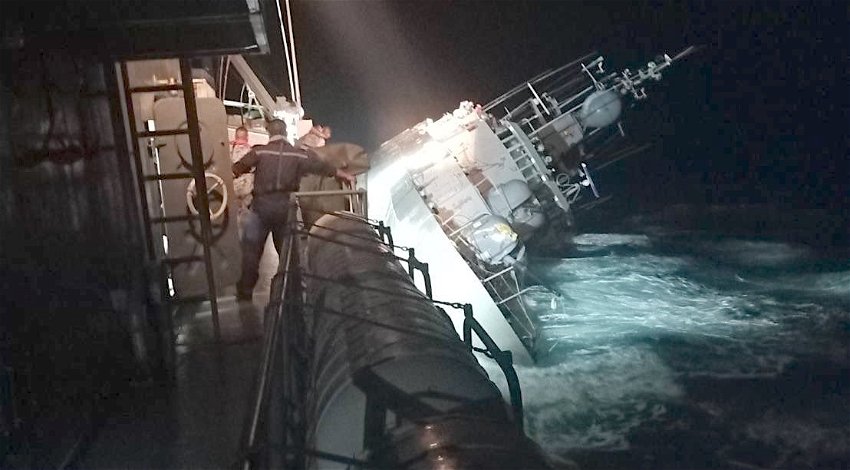 Heavy seas in the Gulf of Thailand have sunk a naval corvette warship resulting in more than 100 sailors needing to be rescued.

Authorities in Thailand said that as of Monday, December 19 that at least 12 sailors were still missing after the HTMS Sukhothai naval corvette sank. High winds and big waves apparently caused the ship to list allowing seawater to flow into the vessel through a pipe.

Navy spokesperson Pokkrong Monthatphalin said in a statement that the water rushed into the hull causing the ship to capsize.

HTMS Sukhothai is said to have been patrolling about 32km (20 miles) from Bang Saphan District in central Thailand at the time although storms had been forecast.

Ferry services had been suspended after meteorologists warned of high waves and heavy rain on Sunday and Monday.

A massive rescue operation got underway immediately with three other ships and two helicopters rushing to the scene, enabling them to rescue around 100 sailors before the ship went down at around 11:30 pm.

A Thai Navy spokesperson has reported that at least 31 sailors are still missing after a warship sank 32km off the country’s south coast, with around 75 sailors rescued as of Monday morning. pic.twitter.com/vvIYEshYDJ

A statement on Facebook said that 31 people were still awaiting rescue in the water as of mid-morning Monday, with eleven having been taken to a local hospital for treatment.

The Royal Thai Navy has not lost a warship since World War II, the last time as a result of an American torpedo that sunk the HTMS Samui near Malaysia killing 31 sailors.

HTMS Sukhothai was built in the US and was launched in 1987. The vessel was equipped with a range of missiles, naval guns and torpedoes and was one of seven corvettes in the fleet.

Strong winds and heavy seas have caused problems in a number of areas around the Indian Ocean, but the Thai warship appears to be the only one that has sunk.