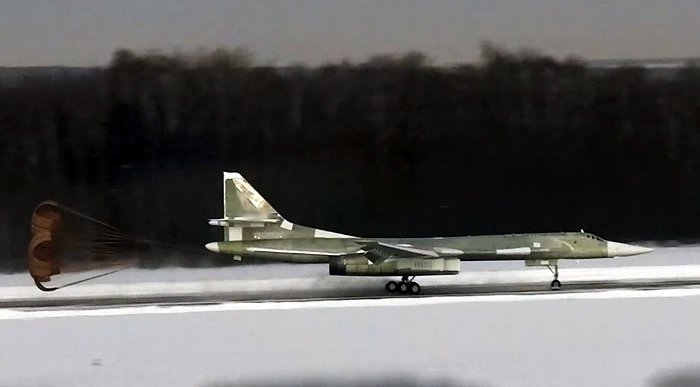 ‘The White Swan’, an upgraded Tupolev Tu-160 aircraft has become the world’s biggest supersonic bomber after it was unveiled in Russia by Vladimir Putin.

Vladimir Putin sent a chilling message to the West today, Monday, December 19, as his military unveiled what is now the biggest supersonic bomber in the world. The upgraded Tupolev Tu-160 aircraft, part of Russia’s ‘White Swan’ fleet has been modified to carry the terrifying ‘Dagger’ or ‘Killjoy’ nuclear-capable missiles.

As shown on video footage from the Russian MoD, the lethal new plane made its maiden flight. Proving its battle readiness, the huge aircraft took off and landed successfully.

This strategic bomber can easily be equipped with the KH-47M2 Kinzhal hypersonic missiles which Western military experts claim to be deadly. With a range of more than 1,200 miles, these missiles can carry a typical 1,000-pound explosive charge, or be fitted with a nuclear warhead.

Travelling at unbelievably high-velocity thanks to kinetic energy, even the strongest reinforced metal is unable to withstand a hit by one of these Kinzhal missiles. As a result, they can blast a hole in the body of a warship with ease. Due to their range, they could even be fired at targets outside Ukraine should Putin decide to do so.

It continued: “The Tu-160M is the largest supersonic aircraft in the history of military aviation and the world’s heaviest warplane, capable of carrying nuclear-tipped cruise missiles. The ‘White Swan’ has been the workhorse of Russia’s strategic missile forces since Soviet times but is now touted to be new and improved”.

A recent analysis by aviation expert Yury Gavrilov led him to comment: “Most of the changes concern the bomber’s on-board electronics systems. As part of the project to modernise the aircraft, technicians created a free inertial navigation system, electronic warfare complex, fuel systems, as well as weapons control systems”, as reported by the Russian publication Gazeta.