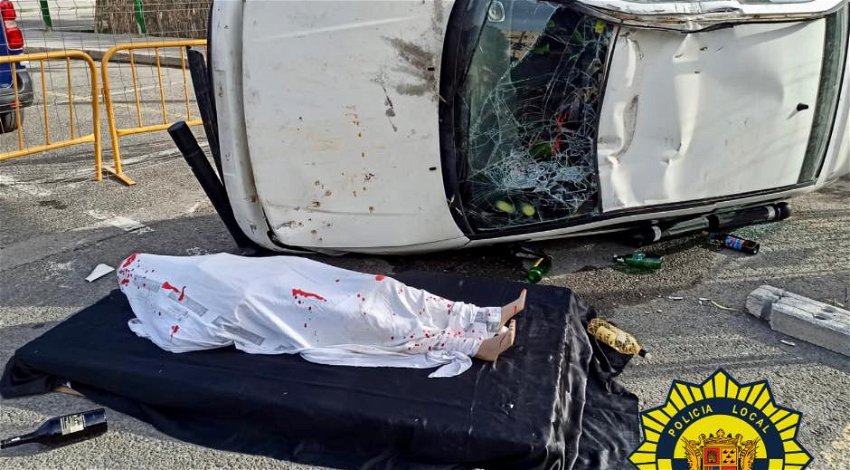 A “HORROR CRASH” in Alicante’s Novelda aims to highlight the dangers of drink driving this Christmas.

The municipal Traffic Department of Novelda launched a campaign to prevent drink and drug driving within the Spanish town, which is located in the province of Alicante.

“The aim is to raise awareness among the population as a whole of the terrible consequences of driving under the influence of drugs and alcohol,” the Traffic Department wrote on Facebook.

The officers set up the scene of a serious car wreck complete with a battered vehicle lying on its side with a mannequin underneath a bloodied sheet next to several bottles of alcohol.

The mock accident scene was erected earlier this week at the Juan XXIII roundabout as the Novelda Traffic Department launched a visual offensive about the consequences of driving under the influence of drugs or alcohol.

Carlos Vizcaíno, one of Novelda’s councillors, and Rafa Sarrió, chief of the local police, appealed to the public to “avoid taking the car and walk instead” during this year’s Christmas period.

Above the staged scene, a banner hung with the slogan: “With alcohol and drugs at the wheel, your journey home could end up like this…”

Vizcaíno also noted, “it is essential for drivers and pedestrians to cooperate in respecting the rules, signposting and pedestrian crossings but, above all, to avoid driving under the influence of alcohol and drugs”.

Sarrió said that “this is the reality of a traffic accident, although the recreation lacks elements such as ambulances, firemen, tow trucks and, above all, the family of the person involved in the accident who must be informed of the fatal outcome”.

The scene of the mock accident comes after shocking footage emerged of a tram crashing into a car in Costa Blanca North’s Denia.

While carrying out necessary tests ahead of the launch of line 9 between Denia and Gata, a village in the Marina Alta region of the north Costa Blanca (Spain), a tram smashed into a moving car on its way through the Joan Fuster avenue in Alicante’s Dénia.

However, no one was hurt in the incident earlier this week as it was a planned simulation!