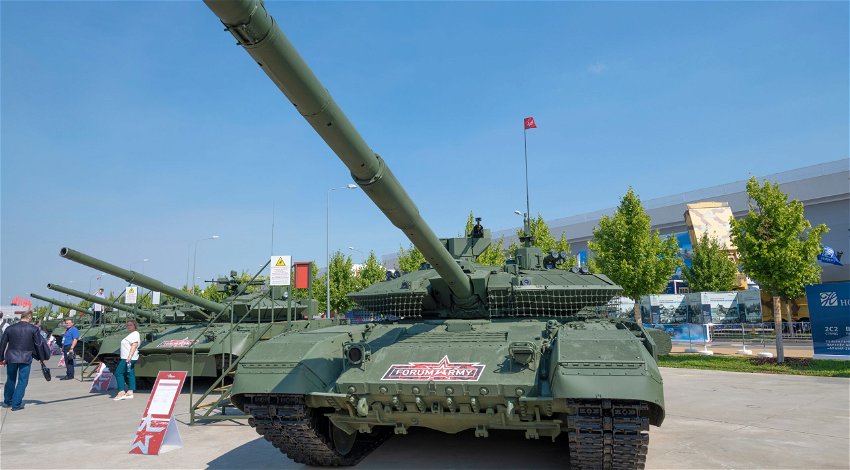 A FRESH batch of Russian T-90M “Breakthrough” super tanks are currently going through training exercises with Russia’s Central Military District tank unit before they go to battle in Ukraine, as reported on Tuesday, December 20.

The Russian Defense Ministry revealed that a batch of advanced T-90M ‘Proryv’ (‘Breakthrough’) main battle tanks were now in service with Russia’s Central Military District tank unit and after the completion of the training, crews will begin to perform tasks in Ukraine.

Russia’s Defense Ministry said that Putin’s €3.4 million T-90 super tanks were being put through their paces before travelling into battle in Ukraine.

“A batch of advanced upgraded T-90M ‘Proryv’ tanks has arrived for an armoured unit of the Central Military District,” the Russian MoD said.

“The tank crews are honing their gunnery and vehicle control skills.”

It added: “Instructors are training the personnel taking into account present-day combat experience.

“After mastering their interoperability, the tank crews will start accomplishing missions within the Otvazhniye (Courageous) battlegroup.”

🇷🇺⚔️🇺🇦Tank crews are preparing for combat missions as part of the "🅾️" group.

After the completion of the training, the crews will begin to perform tasks in SMO zone. pic.twitter.com/GHAG4dYyK7

The news comes after Russia’s redesign of its modern T-90 “Breakthrough” tanks was mocked by a Ukrainian military expert back in October.

On Tuesday, October 4, Oleksandr Kovalenko said that the installation of so-called “chicken coops” on its modern T-90 “Breakthrough” tanks, is ‘meaningless and useless’.

“In 2021, the first photos and videos of Russian tanks appeared, in which very strange structures were installed on the towers, which were some kind of anti-cumulative grids,” he said at the time.

“These structures received many derogatory nicknames among the people, such as “chicken coop”, primarily because their meaninglessness and uselessness were obvious.”

According to Kovalenko, this “chicken coop” should have protected the upper projection of the tank from Javelin ATGM missiles, as well as French MMP and Israeli Spike missiles, but this is not the case.

“Despite the fact that this fact was obvious, we saw a large number of Russian T-72B3, T-80bVM and even T-62 tanks with “chicken coops” on the towers,” he said.

He added: “In October, the first confirmation appeared that “chicken coops” are already being installed even on the most modern, conditionally serial tank of the Russian Armed Forces T-90 “Proryv”.

“That is, meaningless, useless “chicken coop” becomes a standard installation on all types of Russian tanks? It seems so.”

On Tuesday, May 10, the Ukrainian Ministry of Defence released aerial footage of a Russian T-90M tank, believed to be the most technologically-advanced vehicle at the disposal of Russian President Vladimir Putin, was destroyed by Ukraine forces by a Swedish hand-held anti-tank grenade.

On Saturday, August 6, another Russian T-90 super tank was destroyed by a Ukrainian missile strike.