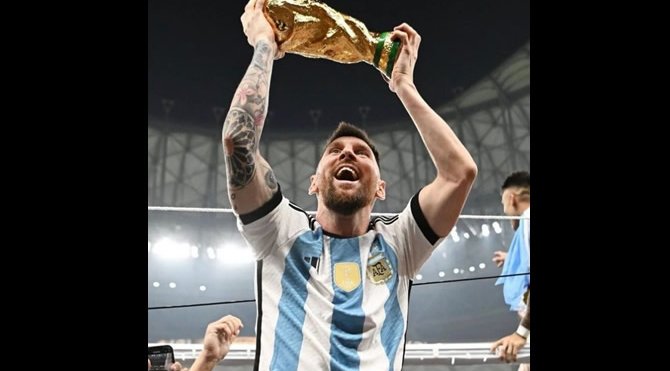 An Instagram post by Lionel Messi showing him holding the World Cup has become the most-viewed of all time on social media.

A post on social media from Argentinian superstar Lionel Messi has today, Tuesday, December 20, become the most-viewed of all time. The footballer took to Instagram following his nation’s World Cup victory over France last Sunday 18. It has since received an incredible 64.5 million likes, and counting.

His follower count has also increased substantially, reaching 404 million. He still trails the 500 million that Cristiano Ronaldo has though, a figure the Portuguese achieved last week.

Messi’s post read: ‘WORLD CHAMPIONS!!!!!!! I dreamed it so many times, I wanted it so much that I still haven’t fallen, I can’t believe it……’.

It continued: ‘Thank you very much to my family, to all who support me, and also to all who believed in us. We demonstrate once again that Argentines when we fight together and united we are capable of achieving what we set out to do’.

‘The merit belongs to this group, which is above individualities, it is the strength of all fighting for the same dream’, he concluded.

Previously, the record had been held by a TikTok video titled ‘the egg’, uploaded in August 2020 by Bella Poarch. It hit 56.1 likes as she was seen miming to British rapper Millie B’s hit song ‘M to the B’.

Cristiano Ronaldo had another huge hit last month just before the Qatar World Cup started. He posted a Louis Vuitton advert showing him playing a game of chess with Messi. It racked up an amazing total of 41.9 likes.