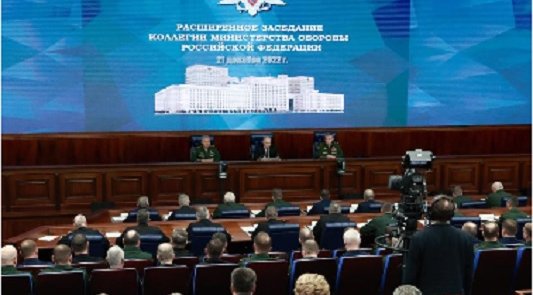 Speaking at the final meeting of the military board for 2022 Putin told his commanders to grow the defence force and that there is an unlimited supply of funds for equipment.

Making the announcements on Wednesday, December 21 Putin also said that the age of conscription will be raised gradually from 18 to 21 and the maximum age from 27 to 30.

Appearing together with the Minister of Defence Sergei Shoigu, the Russian president said that the number of military personnel would be expanded by 30 per cent and that two dozen new divisions would be deployed.

That will see the Russian army swell to around 1.5 Million of which 695,000 will be so-called contract troops, that’s a little under twice the current number.

He also spoke of the need to re-establish the Moscow and Leningrad Military Districts, as he did the creation of a new grouping of troops in the north-western regions in response to the possible accession of Finland and Sweden to NATO.

Among the new divisions will be five artillery, two airborne assault and three motorised, which will according to Shoigu result in seven more motorised rifle divisions and five marine divisions being deployed.

He has also called for the formation of three more directorates of air divisions, one fighter and eight bomber aviation regiments, six brigades of army aviation in the Aerospace Forces of the Russian Federation. Each combined arms and tank army, he said, should have a mixed aviation division and an army aviation brigade of 80-100 combat helicopters.

Putin said that the issues and failings of the army in Ukraine will be fixed and that the improvement of the armed forces will go “calmly, rhythmically, without any fuss, consistently.” He added that we will not repeat the mistakes of the past: “We will not engage in the militarization of the country and the militarisation of the economy.”

Saying that Russia had tried to be part of the so-call civilised world, they were not expected there and that a clash with hostile forces was inevitable. With the western world funding Ukraine, he said Russia will maintain and improve the combat readiness of its nuclear triad.

“This is the main guarantee of preserving our sovereignty and territorial integrity, strategic parity, and the overall balance of power in the world.” That will see the new Sarmat intercontinental ballistic missiles be put on combat duty. Shoigu repeated that the nuclear arsenal remains for defensive purposes.

Putin told his commanders they must provide their troops with everything they need, the latest equipment, weapons,  first-aid kits, dry rations and shoes, since “there can be no trifles on the battlefield.”

He stressed that the armed forces receive all the required funds: “We have no restrictions on funding, the country, the government give everything that the army asks, everything. I hope that the answer will be properly formulated and appropriate results will be achieved.”

Putin has not only told his commanders to grow the defence force but has told them that money is no object and that it should be used to give troops the latest and best weapons and equipment.