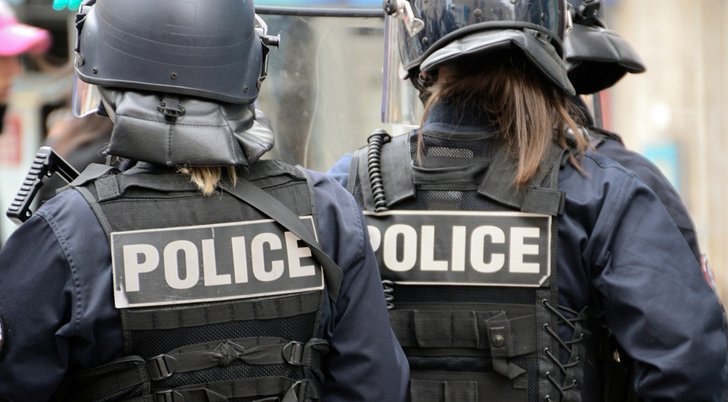 Riot police took to the streets of Paris this afternoon, Saturday, December 23, following an incident that occurred around midday in which three people were killed and three others wounded.

Angry crowds gathered near the scene of the crime, throwing projectiles at police officers. Cars were damaged, restaurant furniture overturned, and rubbish containers were knocked over as police responded with teargas.

Earlier in the day, a 69-year-old man – named by French prosecutor Laure Beccuau as William M – was subsequently arrested for the attack on Rue d’Enghien. French police have initiated an investigation into murder, manslaughter and aggravated violence.

Beccuau revealed that the detainee had recently been in detention but was recently freed while he awaited trial after an attack one year ago on a Paris migrant camp, using a sabre. Last June, the man was convicted for violent acts he carried out in 2016 while armed with a weapon. He launched an appeal shortly after.

Gerald Darmanin, the French Interior Minister claimed that the attack had been racially motivated. The victims of his attack were all reported to have been Kurds, with Darmanin insisting he was clearly targeting the foreign community.

President Macron tweeted: “The Kurds of France have been the target of a heinous attack in the heart of Paris. Thoughts to the victims, to the people who are struggling to live, to their families and loved ones. Recognition to our law enforcement for their courage and composure”.

William M turned up armed with a gun said witnesses and: ‘deliberately targeted an area full of immigrants, including recent arrivals sleeping rough. He threatened people in a hairdresser, a restaurant, and people close to the Ahmet-Kaya Kurdish cultural centre. He seemed intent on killing as many people as he could’.

Leaders among the Kurdish community in Paris have been calling for better protection in the city. This follows an incident in which three Kurdish women were killed more than ten years ago, as reported by metro.co.uk.

Posting on Twitter, Anne Hidalgo, the mayor of Paris wrote: “The Kurdish community and, through it, all Parisians, was targeted by these assassinations committed by an extreme right-wing activist. Kurds wherever they reside must be able to live in peace and security. More than ever, Paris is by their side in these dark times”.