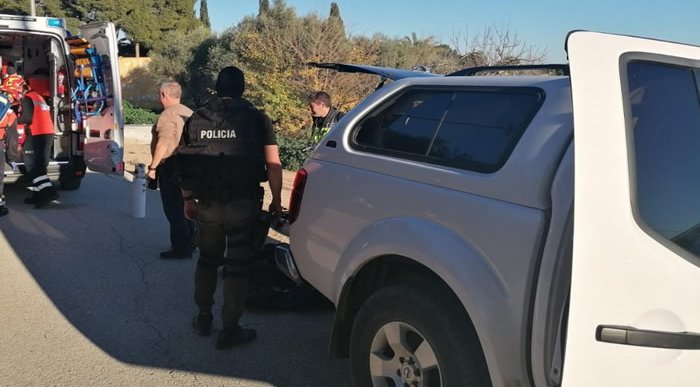 Image from the siege operation in Murcia. Credit: [email protected]

A 36-hour siege in the Region of Murcia is finally over after a police operation to free a woman taken hostage by her brother.

As confirmed by a National Police spokesperson today, Saturday, December 24, a siege situation that had developed in a house in the Region of Murcia is finally over. A man had taken his sister hostage but a team of GEO specialists freed her at around 4:50pm this afternoon.

The man had held his sister in the house in the Cañada Hermosa district since 6pm on Friday 23. neighbours raised the alarm after hearing the sound of gunshots coming from the property.

A police operation was launched that lasted almost 36 hours. The area around the home was cordoned off, close to the El Pedrusco restaurant. Traffic in the vicinity was diverted away from the area as a precautionary measure.

In a huge operation, specialist teams from the Prevention and Reaction Unit (UPR), the Special Operations Group (GEO), and members of the  Special Security Operations Groups (GOES) of Valencia were deployed to the location. An expert negotiator was also dispatched.

It would appear that the man had a dispute with his family over the custody of one of his children. As a result, he threatened to end their lives. During the course of the siege, the man fired several shots at the police. One of the officers who actually released the sister suffered injuries but has since been discharged.

The incident started when the police learned that the man had committed a criminal act in Molina de Segura. Following his trail, they were quickly led to the house in Cañada Hermosa. “We could be talking about an attempt at illegal detention and coercion”, a police spokesman said.

Once the area of ​​the house in the orchard where he was holding his family member – who has been transferred to the hospital – was cordoned off, direct talks began with the barricaded man. These proved unsuccessful. At around 3pm, two shots were heard, followed by several more.

Everything came to a head at around 5pm with the arrest of the person who had locked himself in the ‘perfectly armed’ house and opened fire on ‘the intervening policemen’, as the spokesman described.

The detainee was subsequently taken to a Murcia health centre for a medical assessment. According to the testimony of some neighbours, he could have suffered injuries to his hand after the launch of smoke canisters and the demolition of a door.

His sister is thought to have been released without injuries. An investigation continues to determine the facts behind the incident. A special mention was made of the canine unit whose dog was responsible for incapacitating the man, as reported by laopiniondemurcia.es.