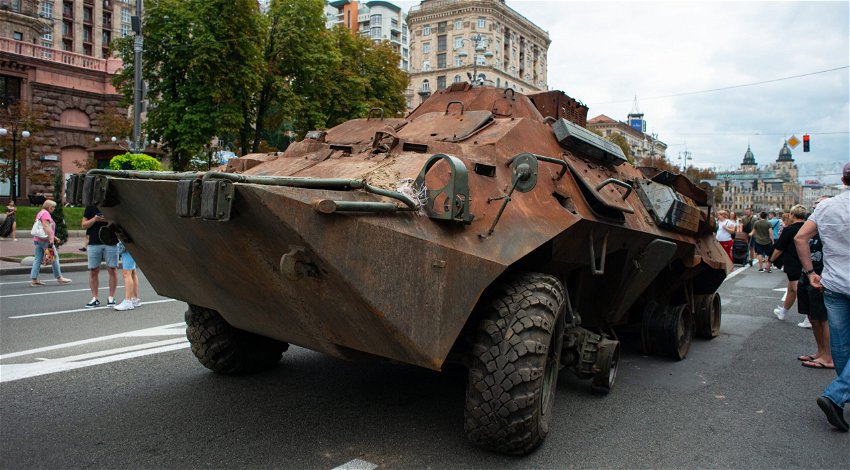 Image: Kyiv, Ukraine - 08.20.2022 Parade of Russian military equipment on the main street of the capital of Ukraine. In the photo captured equipment APC "BTR-80" - Anton Yardov/Shutterstock.com

In the updated Russian combat losses, Ukraine’s MoD announced that a further seven Russian Armoured Personnel Carriers (APCs) had been destroyed by Ukrainian forces on Sunday, December 25. This takes the number of Russian APCs lost in Ukraine to 6017.

According to the latest data, another 550 Russian soldiers died in battle, which has brought the total to around 102,600.

Five more Russian tanks were also destroyed, taking the number blown up by Zelenksy’s troops in Ukraine to 3016.

While Russia lost another five artillery systems in Ukraine and has now lost 1996 in total.

Загальні бойові втрати противника з 24.02 по 26.12 орієнтовно склали / The total combat losses of the enemy from 24.02 to 26.12 were approximately: pic.twitter.com/YmibtFuyED

Ukraine also reportedly shot down one Russian drone, meaning that Russia has not lost 1707 since the beginning of the war.

The news comes after Russian President Vladimir Putin said earlier this week that Russia was ready to negotiate with all parties involved in the war on Ukraine, after accusing Kyiv and western allies of “refusing” to negotiate.

Putin said in an interview with Rossiya 1 state television: “We are ready to negotiate with everyone involved about acceptable solutions, but that is up to them – we are not the ones refusing to negotiate, they are.”

He added that Russia was heading in the “right direction” in Ukraine because the west was trying to leave Russia apart, led by the US.

Putin continued: “I believe that we are acting in the right direction, we are defending our national interests, the interests of our citizens, our people. And we have no other choice but to protect our citizens.”