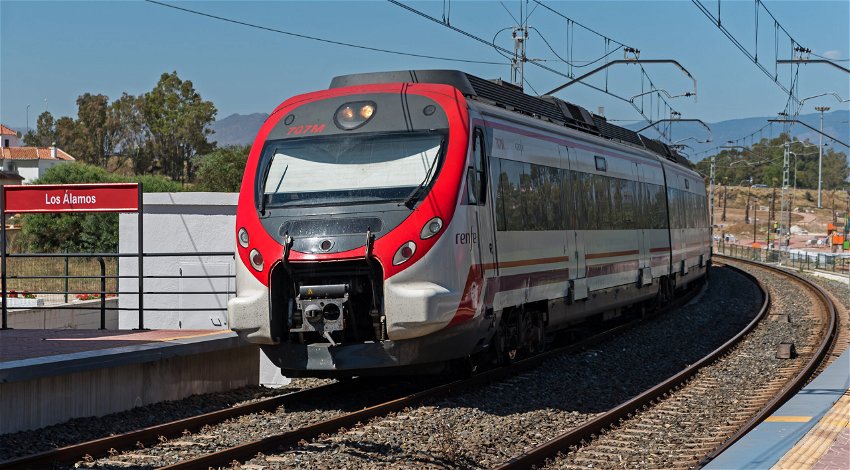 Next Generation funding could be used to extend the coastal railway from the Malaga town of Fuengirola to Algeciras if a proposal from the Junta de Andalucia is approved.

The Junta de Andalucia has proposed extending the current Costa del Sol coastal railway line to connect Malaga with the municipalities at the eastern end of the community. This initiative would see the train line that currently ends in the town of Fuengirola eventually passing through Marbella, Estepona, and on to Algeciras.

This plan is the result of the Government of Spain asking the autonomous communities for a series of proposals that fit with the Recovery, Transformation and Resilience Plan (PRTR). In response, the Ministry of Economy sent 241 different initiatives that could be carried out in Andalucia.

In Malaga alone, if all the requests were granted, they would add more than €2,000 million of investment. A total of €43,233 million in European financing has been made available in all the provinces of Andalucia through Next Generation funds. According to previous estimates, the train line extension would cost around €2,000 million.

The Andalusian proposal does not only apply to the Cercanias network but also reportedly raised the possibility of adapting the line to high speed. This would enhance the connection between Marbella and Malaga airport, offering a real boost in terms of tourism and logistics.

It would also ‘save tons of CO2’, create employment and mobility in the area, and improve ‘speed, competitiveness, interconnectivity’ and security’, claimed the proposal. This initiative was originally presented to the Government in 2020 but no response was received.

Noteworthy among the other initiatives presented by the Ministry is the construction of buildings and facilities for the implementation of oncological proton therapy treatments. This request makes sense within the framework of the Amancio Ortega Foundation’s donation of equipment for this treatment.

In Malaga, the necessary investment would rise to €3.6 million, which, when added to the €5.5 million that would be needed in Sevilla, makes a total of 9.1 million requested by the community.

Another of the proposals included is the rehabilitation of the building for administrative use located at No47, Avenida de la Aurora – the so-called ‘black building’. Right now the property has different administrative uses and ‘requires a reform in phases in order to update and modernise its facilities and achieve an optimal and orderly space’.

The cost of this project is relatively small for the 15 storeys on which it rises. It has been budgeted at just over €23,000 and would be fully financed – according to the initiative presented by the Board – with European funds, as reported by malagahoy.es.