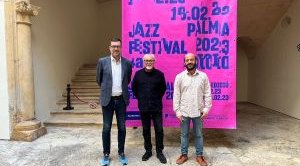 The main performances will take place at the Teatre Xesc Forteza, as is the case of Yass Ahmed, who will perform on February 10.

This trumpet player, composer and producer, whose album La Sabotuse (Naim Records, 2017) won the Jazz Album of the Year Award from The Wire magazine, attracted attention from beyond the world of jazz, something that is not very common in the world of music.

On Saturday, February 11, it will be the turn of the Basque bassist Victor de Diego, who on Sunday will close the first weekend of the Jazz Festival at the Xesc Forteza Theatre.

The following week will feature different jam sessions on weekdays, until the concert by the renowned composer and performer Carlos Sarduy, on Thursday, February 16. On the following day, Eli Degibri arrives, a concert rescheduled from last year’s Festival, which won the Landau Prize for jazz performance.

The Councillor for Culture, Antoni Noguera, explained that the Palma Jazz Festival is a magnificent opportunity to enjoy a first-rate line-up of this musical style in the City of Palma. He also referred to “the Department’s desire to bring jazz music to the citizens by means of complementary activities, open to everyone, which also take place outside the city centre”.

The Festival will offer a whole range of complementary activities that will reach the local neighbourhoods, dates and details of which will be confirmed shortly.

The revived Festival, which had fallen off Palma’s cultural calendar for 20 years, was revived thanks to the initiative of the Department of Culture headed by Noguera. Three years later, the Festival has once again consolidated itself as a musical reference point in the city. The councillor confirmed, “it was not just a question of recovering the Festival, but of bringing it closer to the citizens and to other locations.”

“The music of the jazz groups has reached the neighbourhoods of Palma, and a great deal of work has been done to make it known. This third edition of the Palma Jazz Festival is once again making a commitment to bring to our city a wide range of different jazz styles with national and international references”, explained the councillor.