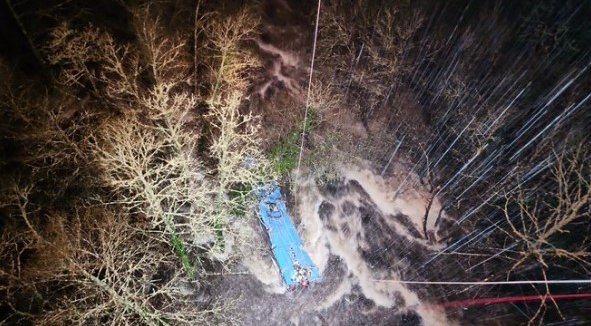 Image of the bus that crashed into the Perez river in Pontevedra. Credit: @112Galicia

A seventh body was located shortly after the rescue operation was restarted following an incident involving a bus plunging from a bridge into the river Lerez in the Pontevedra municipality of Cerdedo-Cotobade.

Emergency services personnel searching for passengers of the bus that crashed into the river Lerez in the Pontevedra municipality of Cerdedo-Cotobade on Saturday 24, located a seventh body this Monday, December 26. That brings the total number of deceased to seven, plus two survivors.

The search operation was restarted after a call was received from the son of a woman who survived the accident. He informed them that his mother had not been travelling alone. One of her relatives was accompanying her on the bus journey to go for dinner he said.

As reported by CIAE 112-Galicia, members of the Guardia Civil and the Cerdedo Cotobade Civil Protection Volunteer Group were deployed on Monday morning. Firefighters from O Deza Fire Brigade and the A Estrada Emergency Service also participated, as well as the Gardacostas.

Shortly after, the Government delegation in Pontevedra confirmed that the body of a woman, around 50 years old, had been located, as reported by larazon.es.

A terrible tragedy occurred on Christmas Eve, Saturday, December 24, in Galicia. According to the latest information from 112 Galicia, a bus with eight occupants plunged into the Lerez river in the Pontevedra municipality of Cerdedo-Cotobade . Six people died and two were injured.

The incident occurred at 9:19 pm on Saturday, on national highway 541, at Km 67.5, as it passes through the town of Pedre, in Cerdedo-Cotobade. As detailed by Maica Larriba, the Government representative in Pontevedra, a total of eight passengers were traveling on the bus, plus the driver.

A passing motorist noticed the broken bridge and informed the 112 emergency switchboard, although it is said that when he peered down, he did not notice the bus in the water below. A call was then received by 112 from somebody inside the bus, explaining the situation.

They revealed that the vehicle belonging to the Monbus company was traveling its Lugo-Vigo route when it allegedly crashed through the guardrail of the bridge, as reported by 20minutos.es .

112 immediately deployed the O Deza Fire Brigade to the location, along with patrols from the Guardia Civil’s traffic department, the Supramunicipal Emergency Group of A Estrada, a Civil Protection unit from Cerdedo -Cotobade, personnel from the Ministry of Transportation, and a 061 ambulance .

A rescue operation was initiated on Saturday evening and two bodies were discovered. Early today, Sunday 25, a third deceased was found inside the bus. At midday, a fourth body was found near the bus.

Later this afternoon, the remaining two bodies were discovered, in an area that was difficult for the rescuers to access. Those rescued alive were one passenger and the driver

Rescue attempts were made all the more hazardous by the high flow and strong current of the river. The water level had almost submerged the bus to the point where only the top of its roof was showing above the water. Firefighters found themselves being lowered onto the bus from the bridge wearing ropes and safety harnesses.

Alfonso Rueda, the president of the Xunta, pointed to the ‘very bad weather conditions’ as one of the possible causes of the accident, which occurred on a straight piece of road. Speaking with the media, Jorge Cubela, the mayor of Cerdedo-Cotobade, described the accident as ‘the greatest misfortune’ that his municipality could suffer.

In a tweet, Pedro Sanchez, the President of the Government, expressed his remorse at the tragedy: “Dismayed at the tragic accident that occurred in Pontevedra. All my love for the relatives of the deceased and wishing that the injured recover soon.” He also thanked the emergency teams for ‘their relief and rescue work in such a complex situation’.