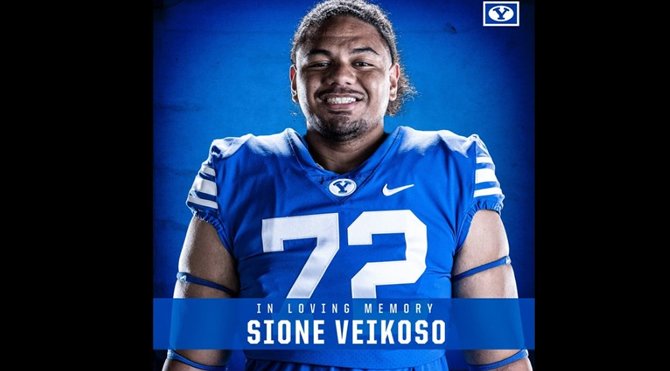 Sione Veikoso, a 22-year-old American football star, died after a 15-foot retaining wall fell on top of him in Kailua, Hawaii.

Sione Veikoso, a 22-year-old college football star died as a result of a freak accident on Friday, December 30. According to the Honolulu Fire Department, Veikoso was killed when a 15-foot retaining wall made of rock collapsed on top of him.

The incident occurred in his home town of Kailua, located on the east coast of the island of Oahu in Hawaii. A total of six men were reportedly trapped when the stone wall fell. Three of them escaped unhurt while the other two were hospitalised.

They are said to be critical, but in a stable condition, as reported by the Honolulu Star-Advertiser. Veikoso’s family confirmed to the publication that he had died at the scene.

In a statement to the paper, Veikoso’s cousin Joshua Kava wrote: “He was a gentle giant who loved his family. He was reliable and caring”. His family told how Sione had worked hard to support his single mother up until her death seven years ago. They described him as a ‘great kid’ who displayed ‘selflessness’.

BYU Cougars coach Kalani Sitake wrote: “We are extremely saddened to learn of the tragic death of one of our brothers, Sione Veikoso. His passing is heartbreaking to all of us. We offer our deepest condolences and prayers to his family as we share in their grief. Our love for you is forever, Sione!”.

On behalf of the entire BYU Football family, our thoughts and prayers are with Sione's family and friends during this extremely difficult time.

Rest in Love Sione. God be with you till we meet again. pic.twitter.com/Bn0oW4kylY

According to a BYU profile, Sione Veikoso was an offensive lineman for Brigham Young University. After attending Arizona State University – where he started his football career – he transferred to the team as a sophomore this Summer. He completed one match this season in the red shirt of the BYU Cougars.