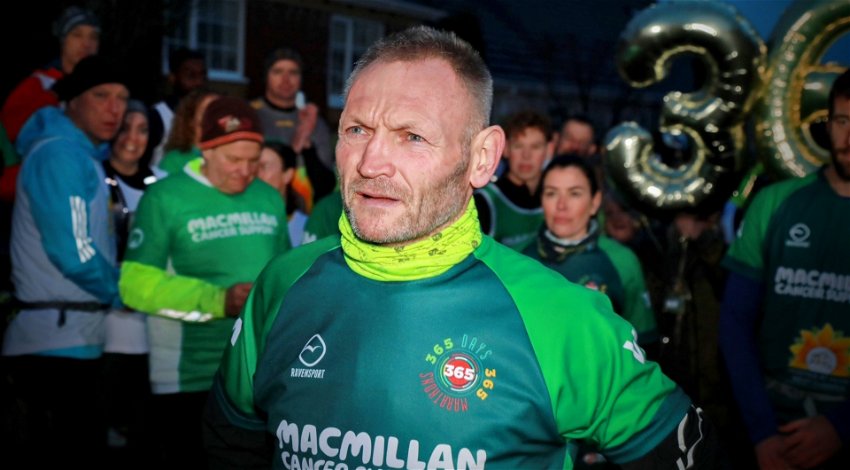 53-year-old man from UK completes 365th marathons in a year for charity. Photo by MacmillanCancerSupport/Twitter.com

Gary McKee accomplished his target of raising over £1 million (€1.12 million) by running a marathon every day of the year

A 53-year-old man from England successfully completed his 365th marathon in a year on New Year’s eve, raising over £1 million (€1.12 million) for charity. Gary McKee from Cleator Moor in Cumbria ran a total of 9,563 miles in a year, which helped him raise more money than he was earlier targetting for Macmillan Cancer Support and Hospice at Home West Cumbria.

The father of three, McKee works as a group leader at a nuclear site in Sellafield, and often ran 26.2 miles (42.1 kilometres) every day in the morning, before starting his shift. Last year, he went through over 22 pairs of trainers, completing his daily marathons, regardless of rain, snow, or sunshine.

Just before starting his last marathon, he made a statement to the BBC and said, “The support has been phenomenal and it always is and the West Cumbrians get behind us, but cancer affects everybody so it isn’t just a West Cumbrian thing, it’s a national thing.

“I just hope that people do get behind us and we do raise that million pounds. If we don’t, it won’t be because I haven’t run 365 marathons. We’ll celebrate the day, have a good laugh on the route and I’m looking forward to finishing.”

Mckeen has been involved in raising money for Macmillian Cancer Support since over two decades. His mission to help the charity started after his father got diagnosed with cancer in 1997. He later died in 2005, after an unrelated illness.

As Mckeen completed his final marathon, Macmillian Cancer Support also celebrated his accomplishment and tweeted, “Gary McKee has crossed the finish line! A brilliant way to end the year!

Gary McKee has crossed the finish line! A brilliant way to end the year!

Talking about completing his final marathon before the end of 2022, Mckeen said in a statement  “The streets were lined. It was raining, but everybody was out clapping and shouting. It was fantastic seeing everybody there. It’s something I’ll always remember.”

Aside from this, Mckeen also has a long history of extraordinary physical feats. This includes climbing Kilimanjaro, trekking through New Zealand and completing the Three Peaks Challenge in less than 24 hours. He has previously run over 100 marathons in 100 days and 110 in 110 days.