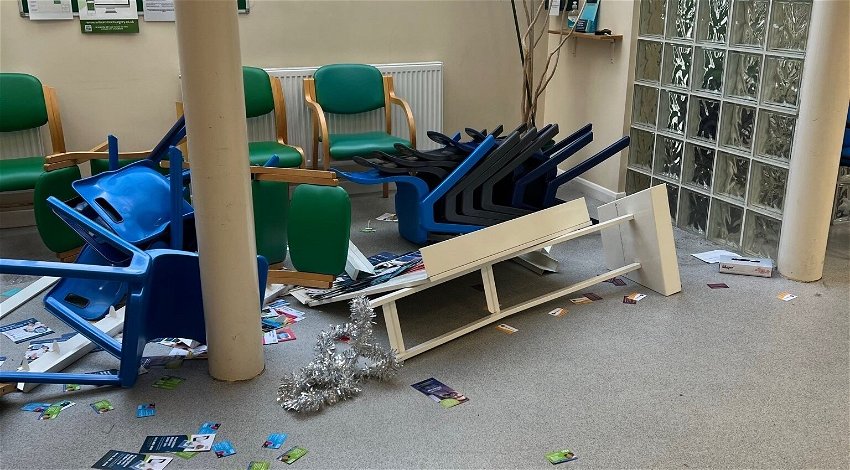 Patients threw furniture and trashed the waiting area of a Local GP in Derby, England, as doctors blame the violent outburst on negative media narrative and anti-GP rhetoric

A local GP in Derby, England was vandalized by patients, after they trashed the waiting area. The incident took place at the Wilson Street Surgery, when patients while waiting for their turn, became violent and started throwing chairs, scattered leaflets and tore apart all the Christmas decorations from the walls.

After the incident, images were shared by Dr Shehla Imtiaz-Umer, who posted on Twitter, stating, “This is our waiting room at Wilson Street Surgery yesterday after a patient trashed it. The negative media narrative, anti-GP rhetoric, unrelenting demand, and unrealistic expectations lead to this level of violence. Where will it end?”

She then posted another tweet that said, “Instead of caring for patients, we have to plan security for our patients’ and colleagues’ safety. Unacceptable for anyone to have to work under these circumstances with escalating attacks. It was a miracle that no one was physically harmed. Who or what will stop this?”

The posts made by the doctor received huge support, after they went viral, as people took to social media to condemn the act of vandalism at the local GP.

The anti-GP violence, abuse & aggression continues unabated. This is our waiting room @wilsonstsurgery y’day after a patient trashed it. Negative media narrative, anti-GP rhetoric, unrelenting demand & unrealistic expectations leads to this level of violence. Where will it end? pic.twitter.com/6mYq43xWp7

One of the comments quoted in the Daily Mirror said, “I’m relieved to read that no members of staff were physically hurt. I hope that you involved the police and off-listed the patient concerned. That is in no way acceptable. I hope that you are all coping ok in the aftermath of this.”

Another wrote, “I’m so sorry you had to experience this Shehla and I hope you’re ok. GPs are ace and everyone should value them,”

Before the recent incident, Dr Imtiaz-Umer had discussed the increase in the level of abuse faced by local GPs in the UK last year.

She said, “Unfortunately we are facing a lot of verbal and at times physical abuse, there is a lot of abuse stemming from frustration.

“I’ve personally had patients swearing at me and saying they do not think I am qualified to make the view I have on their symptoms despite telling them I am qualified. We have had patients banging on the windows and vandalising property and we have had to call the police.”