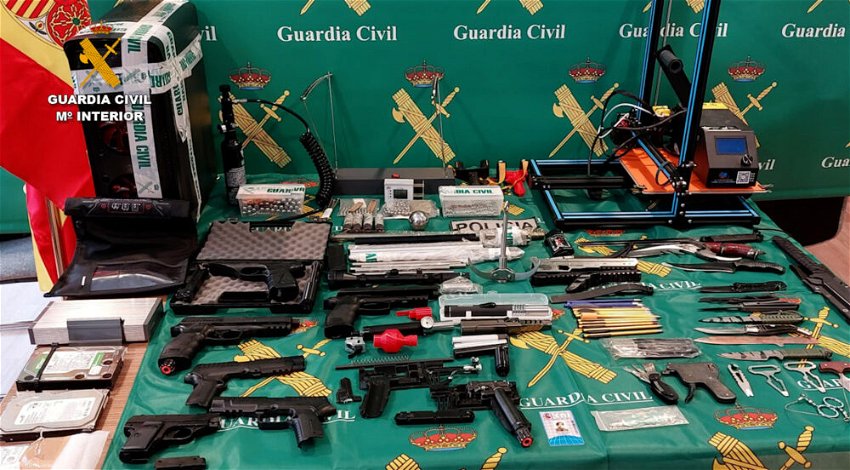 The Guardia Civil in Spain has arrested a man in connection with the possession of illegal weapons, and for posting instructions on the internet about how to make them at home.

The police said that they discovered a workshop for illegally manufacturing weapons using 3D printers, as well as projectiles for gas weapons, inside a detached house located in Ripoll, Girona.

According to official reports, the suspects also posted content on internet forums and platforms, explaining different ways to make weapons capable of firing potentially lethal shots. The man also spread explicit and detailed information on how to make highly lethal homemade explosives, as well as designs for banned parts such as silencers, barrels, and triggers.

Police said that a 3D printer was also found which they suggest was used by the man to manufacture illegal parts used to assemble gas weapons of different calibres.

Necessary raw materials used for the manufacture of the weapons were also found. This included manuals on how to use, handle and manufacture firearms using 3D printing.

Investigation into the case began after the Guardia Civil detected a user posting information about manufacturing and modifying weapons, through publications on web platforms. They said that that all the information was available for public access.

The instructions included how to make major modifications to weapons. Such modification could potentially convert them into prohibited weapons with a high capacity for injury, the police said.

The content posted online also included instructions on designing parts for weapons using a 3D printer. He also gave information on how to print them, apply them, and use them.

During the investigations, the Guardia Civil agents also found several threatening messages against minority groups, as well as others related to extremist and anti-Semitic ideology.

Authorities said that the man also boasted of having participated in parapolice group training, stating that he was taking security measures, in case the security forces and corps entered his home.