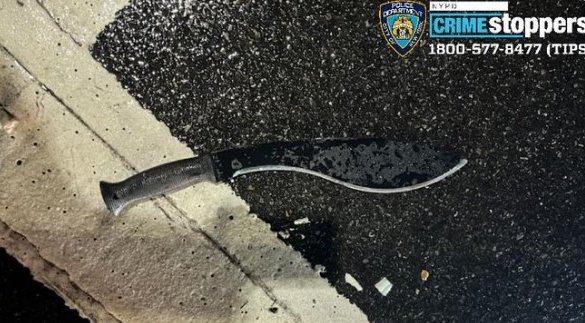 A 19-year-old ‘jihadist’ has been charged with attempted murder after slashing two NYPD cops in New York’s Manhattan district on NYE.

According to police sources, the 19-year-old suspected ‘jihadist’ arrested in connection with allegedly stabbing two NYPD cops on New Year’s Eve in New York’s Manhattan district wrote a chilling manifesto in which he urged his family to ‘repent to Allah’.

Trevor Bickford was apparently on an FBI ‘watchlist’ prior to the incident. A handwritten note was allegedly discovered in his backpack after he was detained. the bag also contained ‘religious material’. A preliminary investigation reportedly showed that the teenager had no previous police record.

The New York Post cited a police source as informing them that the note read: ‘I fear greatly that you will not repent to Allah- And therefore I hold hope in my heart that a piece of you believes so that you may be taken out to the hellfire’.

Addressing his brother Devon, who serves in the U.S. military, he continued: ‘To Devon, there was a time when we were close, but that time has passed. You have joined the ranks of my enemy. And for that I can give you no kind words – return to Allah,’ wrote the 19-year-old, who does not have a criminal record according to a preliminary investigation.

According to a spokesperson for the NYPD, a 19-year-old male was arrested after a machete attack on two police officers during the New Year celebrations in the vicinity of New York’s Times Square late on Saturday, December 31.

Named as Trevor Bickford, the authorities told NBC NewYork that they are currently investigating whether the detainee had travelled to the city from Wells in Maine with the intention of harming cops after previously posting so-called jihadist writings online. He has a brother currently serving with the U.S. military.

According to  Commissioner Keechant Sewell, Bickford allegedly slashed one rookie cop in the head with his weapon during the incident on 8th Avenue. The new officer – named as Paul – had only graduated from the police academy on Friday 30. Another officer was also allegedly slashed by Bickford.

New York Mayor, Eric Adams, speaking at a press conference, said he had spoken with the wounded cop and that he was ‘in good spirits’. He added that he was fully aware that ‘He understood that his role saved lives of New Yorkers today’.

Three officers were attacked in midtown this evening. Thankfully, they are all in stable condition and their attacker is in custody.

They are in good spirits. Their response is an example of the courage and professionalism of our NYPD officers who give so much for our city. https://t.co/4QPoFMBcEr

There is no danger to the public Adams stressed, as did the assistant director in charge of the FBI’s New York field office, Michael Driscoll. They both said the suspect was believed to have been working alone, as reported by dailymail.co.uk.

There has been a suspected shooting incident near New York’s Times Square during the New Year’s Eve celebrations. It was reported online that one NYPD police officer was stabbed and another attacked with a piece of pipe, according to the-sun.com. It is not clear if the shooting was carried out by a suspect or by the police, or by both.

Due to a police investigation avoid West 52nd St and 8th Avenue in Manhattan. Expect a police presence in the area and residual traffic delays in the surrounding area. pic.twitter.com/CrxDPOO27c

Emergency services responded to the popular Manhattan location which is packed full of revellers ready to see in the New Year.

The news outlet reported that the NYPD officer was transferred to Bellevue Hospital after allegedly being stabbed in the head by an individual. There has been no update on the current condition of either cop. Police officers reportedly shot the aggressor and he has been taken into custody.

#BREAKING #NewYear
Shooting on Times Square in New York during New Years celebration, and 2 NYPD officers have been reported being stabbed pic.twitter.com/qMBEa3w44n

Shooting at Times Square, police are rushing to the scene. Hectic. pic.twitter.com/WDL502Ldy8