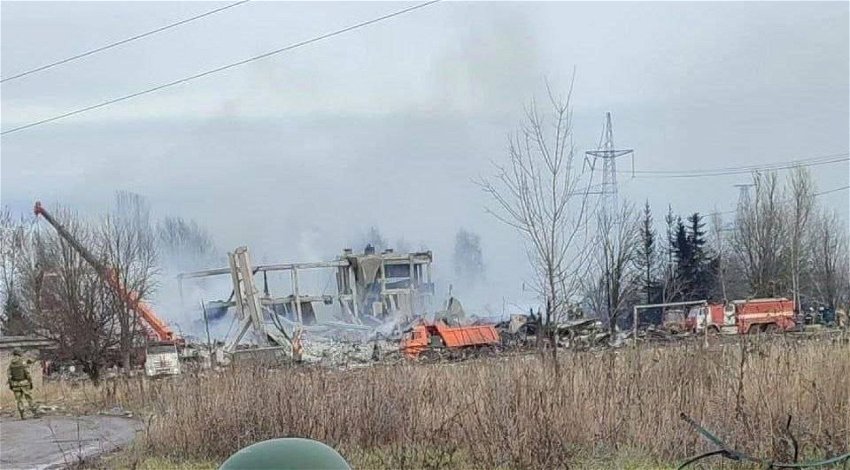 20:42 (January 4) – A Kremlin-honoured war reporter has described the story that troops using mobile phones were to blame for the New Year´s Eve bombing as not very convincing.

Semyon Pegov, who was awarded the Order of Courage by Vladimir Putin said on Telegram: “I rarely say this — but this is the case when it would probably be better to remain silent, at least until the end of the investigation.

“As such, it looks like an outright attempt to smear the blame.”

Initially, the Kremlin said that 63 soldiers had died but that number has since been increased to 89, in a departure from the country´s usual keeping of battlefield losses secret. Ukraine and others have put the figure in the hundreds.

Military leaders had been quick to blame troops saying: “It is already obvious that the main reason for what happened was the switching on and massive use — contrary to the prohibition — by personnel of mobile phones in a reach zone of enemy weapons.”

But Pegov says: “The story with ‘mobiles’ is not very convincing” adding that Russian forces could have been detected by drones or Ukrainian troops could have been tipped off by an informant. He also confirmed that the likely death toll was higher than what had been acknowledged publicly.

Ukraine´s military has also said mobile phones were not how they were located, although using phones with geolocation is a mistake, but rather that Russia was unable to covertly deploy the personnel.

Serhii Cherevatyi, a spokesperson for the Eastern Group of Ukraine’s Armed Forces, the mobile “looks a bit ridiculous” adding that it’s clear they were “putting the blame on each other.” Russian troops have over the course of the war been criticised for mobile phone usage.

Public outrage in Russia has been fuelled by rumours that the troops were being housed near an ammunitions depot in Makiivka, a story that the UK´s Defence Ministry points to a “realistic possibility” and that detonation of the stored ammo caused secondary explosions.

They add that: “The Russian military has a record of unsafe ammunition storage from well before the current war, but this incident highlights how unprofessional practices contribute to Russia’s high casualty rate.”

Although an investigation has been ordered by Putin it is unclear whether the true story will be made public or whether those in charge will seek to apportion blame elsewhere in an effort to save their own skins.

11:07 (January 4) – The recriminations and mudslinging have started with some in Russia blaming troops for using their mobile phones, revealing their location resulting in the deadly bombing of Russian soldiers on New Year’s Eve.

Russia confirmed on Tuesday, January 3 that 63 servicemen had died in the raid by Ukraine, however, depending on which source you read that number varies between 63 and 700. Many believe that Russia´s admission that 63 soldiers is unusual and suggests that the number could be far higher.

Reports by Russian military bloggers suggest that there is fury in Moscow over the killings and that blame is being directed at everyone from military leaders to soldiers using their mobile phones.

The US-based think tank The Institute for the Study of War (ISW) believes that Russia may now try to lay the blame elsewhere and that it is “likely attempting to deflect the blame for its poor operational security… onto Donetsk People’s Republic (DNR) officials and mobilised forces.”

DNR law enforcement has told local newspapers that the strike had happened because soldiers had violated security measures. The use of their mobile phones allowed Ukrainian forces to locate their base and to target their missiles.

But the accusations don´t stop there, the Luhansk People’s Republic (LPR) Deputy Interior Minister Vitaly Kiselyov has suggested DNR head Denis Pushilin must take the blame and should resign.

ISW is of the opinion that the Russian leadership is also being blamed for the deaths and that “profound military failures” such as this one, would further complicate President Vladimir Putin´s efforts to control the war effort and to keep the pro-war hawks on his side.

He has come under increasing pressure with a growing number of voices critical of his leadership. ISW believe his inability to take control of the war and fix the shortcomings of his military has led many to question whether he is capable of winning the war.

It is understood that he has ordered an investigation into the incident and that he wants answers by January 6.

It is known that Ukraine has tracked the mobile phones of Russian soldiers with much of the military communication equipment said to be sub-standard. Whether the use of their mobile phones can be blamed for the deadly New Year´s eve bombing remains to be seen.