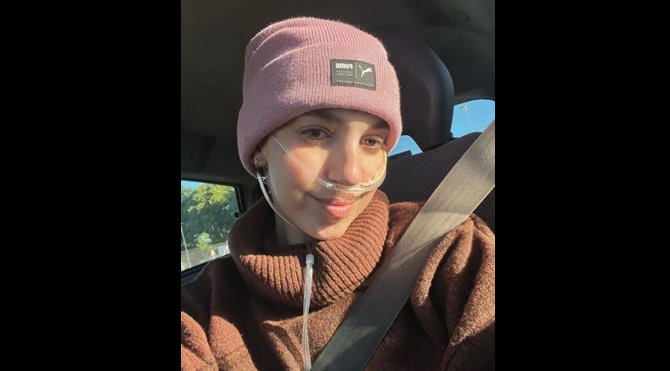 The popular Sevillian social media ‘influencer’ Elena Huelva passed away this morning, Tuesday, January 3, aged only 20. Her death from Ewing’s syndrome was announced by Elena’s family via her Instagram account.

“Since this morning, Elena dances and looks at you from her star. #MisGanasGanan. Thank you for everything”, read the post. Elena was barely 16 when she was diagnosed in 2019 with what is the second most common bone tumour in children.

In an interview with Infosalus last March, the young woman explained: “It is a type of childhood cancer in the bones, which also attacks soft areas”. She was initially diagnosed in her pelvis.

After months of leg pain, doctors then told her that she had sciatica. Eventually, after visiting an orthopaedic surgeon, her real condition was discovered after tests were carried out.

Since being diagnosed in 2019, Elena began to document her life daily on social networks. She quickly gained hundreds of thousands of followers, including in excess of 800,000 on Instagram alone, where she used the tagline: ‘Mis ganas ganan’ (My desires win).

After undergoing chemotherapy and radiotherapy treatments from the moment of diagnosis, Elena was cured after just over a year. However, within months she relapsed with metastases in her lungs, which is known to be very common with this disease.

As a result, Elena tried several various chemotherapy treatments to see if any of them would work. In September 2021, doctors found one that did.

On her Instagram profile, Elena explained that in that year she was able to “do many things. I even wrote my story, turning it into a book”. This was a reference to ‘Mis ganas ganan. Nadie nos ha prometido un mañana, vive el presente’ (My desires win. Nobody has promised us a tomorrow, live in the present’), a title in which she recounted her personal experience with the disease.

One year later though, in the summer of 2022, Elena was told that the treatment had stopped working. “The disease had grown somewhere other than my lungs”, she explained on social media. That same day she started a new chemotherapy treatment.

A few months later, on December 4, the young woman posted a video in which she reported her worsening condition. “Things are not going well. They have found more disease in my windpipe, which is very dangerous. As you know, it’s where we breathe, and I don’t need to say much more”. Her video went viral in just a few minutes.

“I want to make it clear that I have already won, my desire has won because of all the love and the people I have by my side. Whatever happens, I know that my life will not have been in vain because I have fought and I have achieved what I want, to make it visible”, she declared in the video.

Elena finished by repeating her motto: “My desire wins for everything, it is not necessary to win to know that we have already won, because in the end, life is about living and making memories with people, and I take many good memories with wonderful people”.

On Monday 3, the young Sevillian posted a message that worried her followers: ‘I love you’, she said in a photo on a black background. On Tuesday morning, Elena posted that these were “very difficult days, very complicated, more and more”.

The young woman personally vindicated a greater study of her illness. “I just want us to continue fighting for research and investment in a disease as terrible as cancer, Ewing’s sarcoma, which is what I have suffered for four years”, she recently wrote in a post, as reported by malagahoy.es.