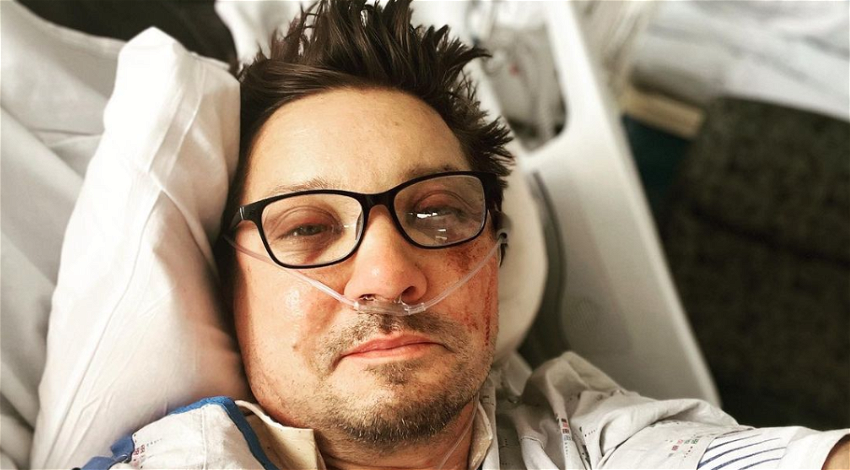 American actor Jeremy Renner has made his first statement from a hospital bed, after he posted his photo on Instagram.  The Avenger actor, who was recently involved in a tragic accident, also said, ‘I’m too messed up now to type’.

According to a recent statement by U.S. authorities in the New York Times, “The actor, was run over by a snowplow weighing more than 14,330 pounds (6,500kg) that he had used to tow his car on a snowed-in private road near his home in Reno, Nevada”.

This statement was released by Sheriff Darin Balaam of Washoe County.

Balaam said that the incident happened after Renner was helping a family member who was driving and was stuck in the snow.  “Renner went to retrieve his PistenBully or Sno-Cat – an extremely large piece of snow removal equipment, in an effort to get his vehicle moving”.

“After successfully towing his vehicle from its stuck location, Renner got out of his PistenBully to speak to his family member. At this point, it was observed that the PistenBully started to roll.

“In an effort to stop the rolling PistenBully, Renner attempts to get in the driver’s seat of the PistenBully. Based on our investigation, it is at this point that Mr Renner is run over by the PistenBully.”

Meanwhile, after Renner posted his most recent photo, several celebrities also commented and sent their love.

Joe and Anthony Russo, the directors behind Captain America: The Winter Soldier and Civil War, as well as both Avengers: Infinity War and Avengers: Endgame said, “Sending all of our love, brother, and hopes for a speedy recovery”

Talk show host Jimmy Fallon said, “Lotsa love out there for you bud.