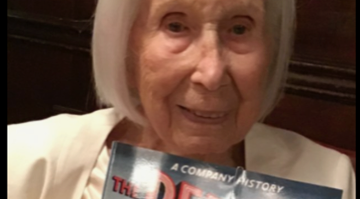 The International Day of Commemoration in memory of the victims of the Holocaust 2023 takes place on Friday, January 27.

Bea Franklin really is an incredible lady. At 98 years of age, 99 in June, when most people her age would be taking it easy, Bea never stops!

Bea’s marriage to Corporal Jerry Franklin exposed her to some of the most historic moments of World War II. “Jerry was a US Army photographer,” Bea confirmed. “He was there for invasions all throughout Europe and Africa and, most notably, took graphic photos at The Liberation of the Dachau Concentration Camp.”

“My husband was a very positive person, he never spoke about the holocaust, the photographs spoke for him. He just wanted to focus on the positives of life.”

Bea added: “One of his most iconic photos that we have in his photo album is one of then-president Franklin Roosevelt with future president Dwight Eisenhower. The pair are sitting in a jeep with General Patton at Castelvetrano Airport in Sicily, Italy, after the conferences at Tehran and Cairo on December 8 in 1943.”

Bea explained how her husband often crossed paths with some of Hollywood’s legendary film stars. “When film stars visited the frontlines Jerry took some great photos including Humphrey Bogart, Mickey Rooney, Tony Curtis, Jack Lemmon and Joe E. Lewis, who became famous from his role in Some Like It Hot with Marilyn Monroe.”

“Even though Jerry took the photos, they don’t belong to him,” Bea confirmed. “As he was working for the US Army and they own the photos so we cannot use them without their permission. Jerry has got copies of all the pictures he took and put them in albums but this was back when you had to develop the photos yourself,” she quipped.

Bea was even present for the iconic “Kiss” of the unknown sailor in New York’s Time Square just eight days after the two atomic bombs exploded in Hiroshima and Nagasaki (Japan) at the end of World War II. “I was at university in New York when we heard the war in Europe was over” she confirmed. “Everyone knew that Time Square would be the place to celebrate, people flooded the subway.” 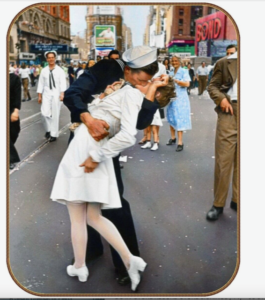 “We arrived in New York and witnessed the sailor kissing the nurse.”

When asked about her secret to longevity, 98-year-old Bea simply responded, “positive thinking!”