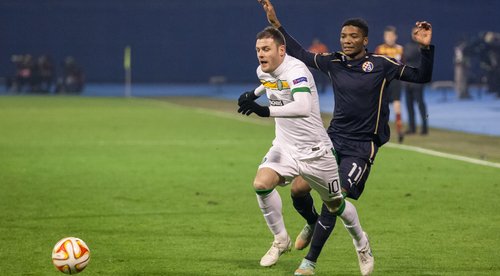 The former Republic of Ireland international footballer Anthony Stokes has been arrested in Ireland after failing to appear in court in Scotland on a charge of dangerous driving and possession of drugs.

According to the Irish Mirror on Saturday, January 7 Stokes was stopped by the Gardai after he was spotted driving dangerously. They brought the vehicle to a controlled stop and found Stokes to be the driver.

Stokes was arrested along with another male and detained overnight at the Crumlin Garda Station.

A search of the vehicle revealed drugs estimated to be worth around €4,500 and a quick check showed that he is wanted in Scotland under a warrant issued by the Hamilton Sheriff´s Court

Following questioning both men were released from the station and will appear in court in due course. The drugs found in the vehicle have also been sent away for analysis.

The Gardai confirmed the arrest saying:  “Both men were detained in Crumlin Garda Station under Section 4 of the Criminal Justice Act, 1984 and have been charged in relation to this.

“They have since been bailed and are due to appear before the court at a later date.”

Stokes is on bail in Scotland after failing to turn up for a court hearing. The former Celtic and Ireland international was banned from contacting his former partner and her mother for four years in September 2019. He was also handed a four-year non-harassment order after he admitted to stalking.

His sentencing was deferred for good behaviour but he openly admitted that he had breached the non-harassment orders by repeatedly sending emails and texts to his former girlfriend. He also acknowledged repeatedly calling her mother in November and December 2019.

He also admitted threatening his ex-partner and repeatedly telephoning her parents to “utter inappropriate and offensive remarks” about her.

Capped nine times for Ireland the former footballer also enjoyed stints with Sunderland and Hibernian, Stokes is not a stranger to controversy. He once head-butted Elvis impersonator Anthony Bradley in a Dublin nightclub and never paid a court-ordered €230,000 to the victim.

At the time he was given a two-year suspended sentence.

Stokes, who was arrested for dangerous driving and for failing to appear in court, has brazenly ignored the arrest warrant even taking to social media to ask: “Any bad news?”