Do images prove Russia’s claim of ‘600 dead Ukrainian troops’ was a fabrication? 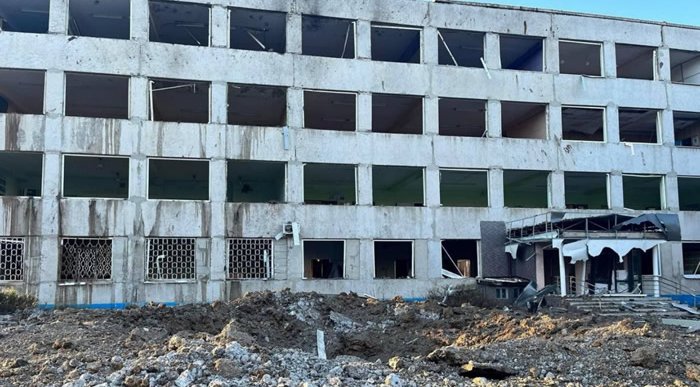 Russia’s claim that they killed 600 Ukrainian troops in a ‘revenge strike’ seems to have been dispelled after images show the supposed building housing them was not even hit.

As reported by Reuters earlier today, Sunday, January 8, the Russian Ministry of Defence claimed to have made a direct hit on a building in Kramatorsk housing Ukrainian troops. They claimed to have eliminated at least 600 military personnel in this rocket strike.

According to the Ministry, the attack was carried out in response to a deadly Ukrainian strike on Russian barracks in the Russian-controlled city of Makiivka, in the Donetsk region.

“As a result of a massive missile strike on these temporary deployment points of Ukrainian army units, more than 600 Ukrainian servicemen were destroyed”, said a statement from Moscow. In response to this claim, a statement from the mayor of Kramatorsk insisted that nobody had been killed in the attack.

Images posted on the pro-Russian Grey Zone Telegram channel show the buildings that Russia claimed to have targeted. It can be clearly observed that the buildings were not even hit and that the rockets landed outside the property, as shown by the craters in the ground. The damage is superficial, with all the windows blown out.

The angry post reads: “Let’s talk about ‘eyewash’. This phenomenon, deeply afflicting our armed forces (and not only them), has in recent months become an active cause for discussion and condemnation both on our channel and among our colleagues”.

“False reports, doctored reports at every level, meaningless reports, and impunity for those carrying out these activities have long been a constant companion of current events”.

“For example, we have become accustomed to the fact that Mr Konashenkov in his briefings has destroyed almost more HIMARS than was delivered to Ukraine, and that Ukrainian Su-25 attack aircraft have already shot down 4 times more than they had”.

“However, sometimes the desire to cover one’s ass from investigation reaches unbelievable heights. And now, in an attempt by the to media pay back the situation with the strike by the AFU on the location of our soldiers in Makiivka, the Ministry of Defence has issued an ‘operation of retaliation’, striking at the location of Ukrainian soldiers in Kramatorsk”.

“The missile strikes on the night of 8 January struck the 28th and 47th schools in Kramatorsk, where enemy soldiers were stationed. As can be seen from the results from the scene, direct hits on the buildings were never achieved – the rockets hit either the ground nearby or neighbouring garages, knocking out windows and damaging the cladding of the colleges”.

“It is not clear to us who, and for what reason, decided that 600 Ukrainian soldiers were instantly killed inside if the building was in fact never hit (even the lights remained on). It is not clear how this was reported and at what level they decided to ‘rub in points'”.

“What we have here – instead of real destruction of enemy personnel, which would have been a decent response – is an invented media operation of revenge”.

“If one wants to retaliate for the deaths of Russian soldiers, one would firstly punish those responsible for their mass deployment within missile range and secondly, preemptively and precisely destroy the enemy without timing it to any event”.