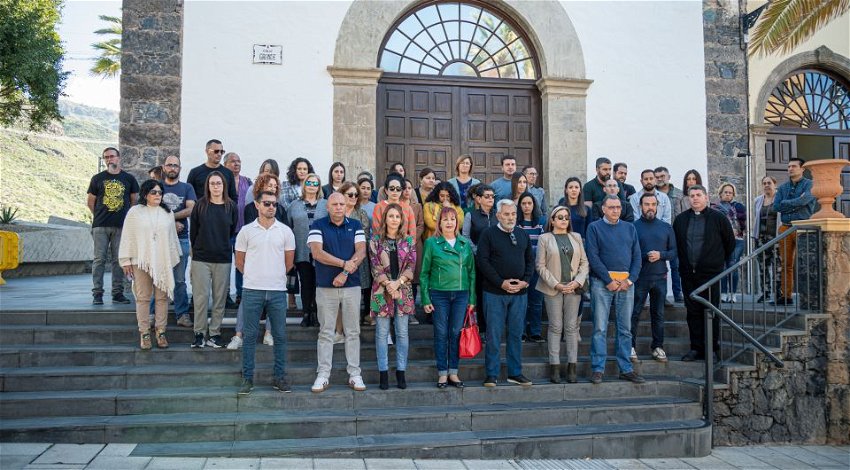 Hayate was murdered around midnight on Sunday, January 8, allegedly by her ex-partner who is already in custody.

The mayor of Adeje, Jose Miguel Rodriguez Fraga, and Adeje residents held a minute’s silence at midday on Monday, January 9, to express their unanimous repulsion against this kind of violence and as a mark of respect for Hayate’s family and friends.

The Adeje Town Council also called an extraordinary plenary session, to declare official mourning in the municipality for the murder of Hayate, suspending all leisure activities and flying the flags at half-mast on Tuesday, January 10.

After the minute’s silence, the mayor said: “The death of a human being always causes us sorrow and pain but it is made worse with the added fact that it has occurred in the heart of our community. At midnight last night, we received a call alerting us to a possible attack of male violence. The local police intervened and found a woman in critical condition with a neighbour who had restrained the aggressor.”

“One of the first concerns is for the four minors, two children and two teenagers who have already been referred to the resources of the Autonomous Community. We are waiting for confirmation that this is a crime of gender violence, which is what it appears to be.”

The mayor added: “I want to strongly express our rejection of any type of violence, especially gender violence, which we are experiencing this week in a dramatic way in the country of which we have had four cases so far this year. Something is not working and something has to be reviewed and taken into account. From Adeje, we want to express the repulsion and pain of the whole town, especially in the neighbourhood of Armenme. We would like to send our support for the family, as well as give thanks to the intervention of the neighbour who made it possible to arrest the aggressor”.

The Adeje Town Hall would like to remind the public that there are numerous resources for reporting gender violence. The Ministry of Equality, through the Government Delegation against Gender Violence, provides a telephone service for information, legal advice and immediate psychosocial care by specialised personnel for all forms of violence against women, through the short number 016; by WhatsApp on 600 000 016; through an online chat on the website of the Government Delegation against Gender Violence and by email to the 016 online service: [email protected]