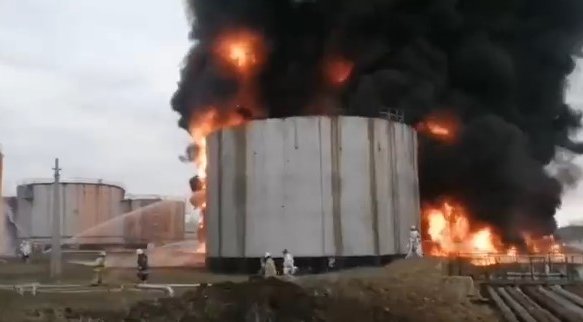 A mysterious explosion that occurred in a gas pipeline in the Lutohin region of Lugansk has been confirmed as an act of sabotage by the police.

Russia’s Ministry of Internal Affairs confirmed that the explosion that took place on the gas pipeline near Luhansk was probably the work of a Ukrainian sabotage team. “According to preliminary information, TNT equivalent to around 500 grams was used to create the explosive device”, they posted on Telegram.

The police noted that the bomb squad experts examined fragments of a damaged pipe, and soil samples, along with fragments of a concrete structure with traces of soot removed from the explosion site.

They came to the conclusion that it was a targeted attack, with Ukrainian sleeper cells already being blamed, as reported by gazeta.ru.

The fire has been extinguished that raged after a mysterious explosion hit a gas pipeline in the Lutohin region of the LPR.

A statement from Luganskgaz said: “At the moment, specialists from the State Unitary Enterprise Luganskgaz extinguished the fire on the main gas pipeline with a diameter of 273 mm in the city of Lutugino by closing the valve”.

They added that employees of the enterprise will now begin to examine the damaged section of the gas pipeline to determine the cause of the explosion, as reported by gazeta.ru.

An explosion occurred this afternoon, Saturday, January 7, in a gas pipeline located in the Lutohin region of the Russian-occupied Lugansk People’s Republic. According to the TASS news agency, around 11,000 people have been left without a gas supply as a consequence.

The incident was reported by the state enterprise ‘Luganskgaz’ on its official Telegram channel. It wrote: “On the evening of January 7, in the city of Lutugin, an explosion occurred on the main gas pipeline with further ignition”.

It continued: “At the moment, specialists from the State Unitary Enterprise Luganskgaz, headed by the management of the enterprise, are present at the scene of the incident. Work is underway to extinguish the fire. About 11,000 subscribers are temporarily without a gas supply in the Lutuginsky district”.

No timeframe for the expected restoration of the gas supply has been reported by the company yet. The administration of Lutugino and the Lutuginsky district, citing the Luganskgaz enterprise, reported that the gas supply to the area was suspended due to an accident on the gas pipeline.

A message posted on the website of the administration of Lutugin and the Lutugin district read: “On January 7, an accident occurred on a high-pressure gas pipeline in the area of ​​​​the Lutuginsky dachas”.

“In connection with the accident, the supply of natural gas was stopped in the cities of Lutugino, Belorechensky, Georgievka, Lenina, Uspenka, Vrubovsky, Chelyuskinets, along with the village of Lesnoy, as well as on Znamenka Street and in the village of Roskoshnoye”, it added.

An explosion occurred on the main gas pipeline in the city of Lutugino, controlled by the "LNR". About 11 thousand people were left without gas, TASS reports.#Luhansk #Ukraine pic.twitter.com/C7X5gNvMwU