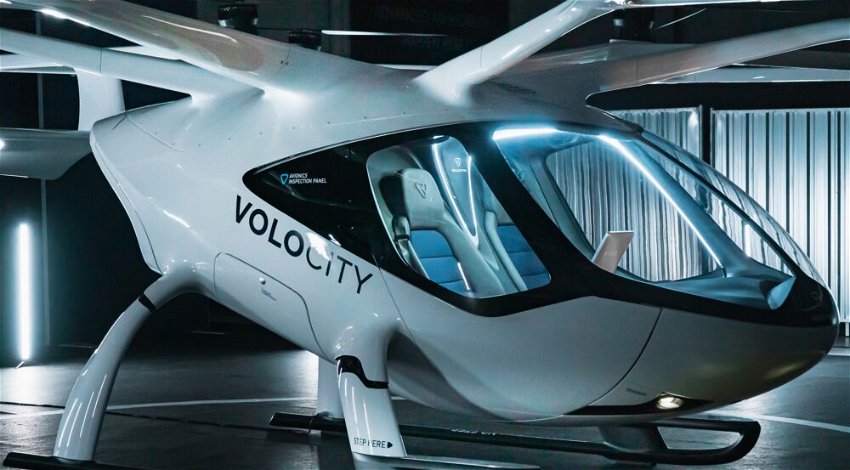 Air taxis to become reality as Volocopter aims for launch ahead of Paris 2024 Olympics. Photo by Volocopter

Unmanned aerial taxis to roll out by 2024 after German manufacturer Volocopter plans to launch them in 2024, before the Paris Olympics

Flying taxis could be a reality within the next two years, as a drone manufacturer from Germany plans to launch unmanned aerial vehicles (UAVs) before the start of the Olympics in Paris.

Visitors at the Olympics in 2024 could possibly get the chance to travel in one of these UAVs known as Velocity, if they plan to achieve this feat.

Manufactured by the company Volocopter, these drones will produce four times less noise than a conventional helicopter and will have the capability to travel up to 20 kilometers.

But as such a major transition takes place with public transport, one of the most important concerns for experts, remains the safety of the passengers.

Talking about the safety issues before the launch of commercial UAVs for passenger travel, Patrick Ky, Executive Director of the European Union Aviation Safety Agency (EASA) says, these next-generation drones are fully equipped to deal with any kind of safety issues.

“My job is to make sure that the only vehicles which can fly are safe. So if you see something flying, then it’s safe because we would have certified it, in particular for the Summer Olympic Games of 2024,” said Ky in a quote cited by Euronews.

He added, “We will certify the machine, which will provide taxi services between Charles de Gaulle [airport] and the centre of Paris. And if it is certified, it means that it’s safe. And so when we say we are certified, it means that we check it’s at the same level as a commercial aircraft, actually. So, yes, if it flies in 2024, it is because it’s safe. Otherwise, it will not fly.”

The EASA head also said that the agency is currently working on “what would be an acceptable level of noise for citizens compared with, typically, a bus or a truck or something like this”.

Several new fully electric drones made by different manufacturers are in the pipeline, as companies are trying to race ahead with the European Commission’s Drone Strategy 2.0.

Through this new strategy, the European Union aims to integrate air taxis in the future of smart, green, and digital cities.

The object of this strategy is also to help the development of the drone market in Europe.

Aside from this, plans are also to integrate drones for large-scale commercial activities in the future.

Andreas Boschen, Executive Director of the SESAR Joint Undertaking, cited in the report said that one of the key roles drones could play, is to deliver medical products and save lives.

“One of our projects, SAFIR-Med, is already showing how important it is to deliver medical equipment, blood samples, organs, whatever, from one hospital to a laboratory or to another hospital. It is safer, it is quicker and it’s more sustainable”, said Boschen.

He added, “Drones are saving lives everywhere in Europe, but also on a global level bringing in vaccines, bringing urgent medical equipment in a safe and efficient manner to people in need”.