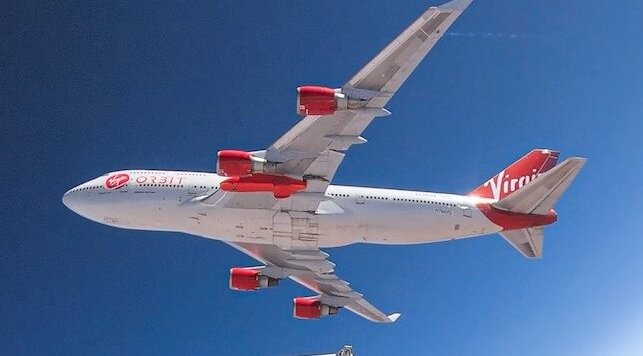 The historic Virgin space mission to deploy UK satellites has failed in its bid after LauncherOne suffered an “anomaly.”

News of the failure on Tuesday, January 10 came as a blow to the team who had hoped to see their payload of nine satellites launched into orbit.

According to Sky News the launch was a cheerful event attended by 2,000 lucky ticket holders, with the converted Boeing 747 leaving at 10 pm to the sound of the Rolling Stones and “Start me up.”

But that excitement did not last long with launch operator Virgin Orbit announcing: “We appear to have an anomaly that has prevented us from reaching orbit,” it announced.

“We are evaluating the information.”

Problems occurred after the second stage release with the rocket Cosmic Girl dropped at 35,000 feet (10,700 metres) above the Ireland coast at around 11:15 pm.

The satellites were due to be ejected shortly after the release but that´s when the unidentified problem occurred, with Matt Archer, from the UK Space Agency, saying the exact cause was still under investigation.

He said: “In effect, the rocket has not reached the required altitude to maintain its orbit or deploy the satellites” adding that it was “obviously disappointing.”

For the rocket to release the satellites it needed to have reached its orbit altitude some 500 kilometres above the earth´s surface.

Archer continued: “We knew this had a risk of failure.

“Launches don’t always work. We’ll pick up with Virgin Orbit and think about what happens next.”

Melissa Thorpe, the Head of Spaceport Cornwall said: “We’re feeling awful, to be honest – I’m not going to lie.

“It’s gutting, and we all heard at different times. When we got together, there were tears, and it was very upsetting.”

But she added: “This isn’t the first time we’ve been knocked.

The facility in Cornwall is planned as a major hub for satellite launches, however, it is quite possible after this failure that no new launches will take place in 2023.

Spaceport Cornwall has been earmarked as a major hub for future launches – Monday night’s should have been the first time satellites had ever been fired into space from Western Europe, let alone the UK.

But Ms Thorpe could not confirm whether the spaceport would see another launch attempt in 2023.

Cosmic Girl returned to its base in Newquay shortly after midnight bringing to an end the historic UK space mission. Although it failed in its bid to launch satellites, those involved say this is not the end of the programme but rather the beginning.