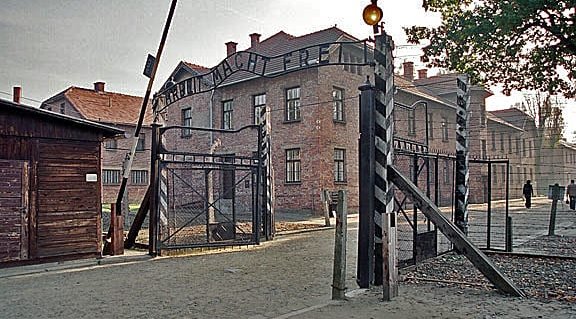 The entrance to Auschwitz concentration camp where Siggi was a prisoner for almost two years. Image: Joshua M Greene.

As well as being a talented author and brilliant communicator.

A former instructor at Hofstra and Fordham Universities, Greene is the recipient of numerous awards for his historical biographies and documentary films.

The author is brave enough to tread where many others wouldn’t with a series of books surrounding Holocaust survivor memoirs. His latest book “Unstoppable” is an epic biography about Siggi Wilzig that reads like a modern-day David-and-Goliath adventure. This story details how a Jewish teenager survived the Holocaust and later went to America where he built an oil and banking empire.

Regarding the book, the author said: “Siggi B. Wilzig, born Siegbert Wilzig, was a survivor of the Holocaust. While American teens were socialising in ice cream parlours, Siggi, as a young boy, suffered antisemitic attacks by Nazi hoodlums for being a Jew. At the age of 16, he, along with members of his family, was deported to the darkest place the world has ever known, Auschwitz.”

“Siggi used his wits to stay alive, pretending to have trade skills the Nazis could exploit to run the concentration camp. After two death marches, he was liberated from the concentration camp Mauthausen in 1945 at the age of 19. After being nursed back to health, he went to work for the U.S. Army Counter-Intelligence Corps hunting Nazis, a service that earned him a visa to America.”

Greene added: “He arrived in New York at the age of 21, with only $240 and no formal education beyond grade school. On arrival, he made three vows: never to go hungry again, to raise a Jewish family, and to speak out against injustice. He earned his first dollar in America shovelling snow after a fierce blizzard. After labouring in toxic sweatshops, he became a travelling salesman.”

“From these humble beginnings, he ultimately became president, chairman, and CEO of a New York Stock Exchange-listed oil drilling company. He then took over and grew a full-service commercial bank listed on NASDAQ to more than $4B in assets. Siggi rose to the heights of these historically antisemitic industries and became one of the most successful businessmen in postwar America.”

Unstoppable: Siggi B. Wilzig’s Astonishing Journey from Auschwitz Survivor and Penniless Immigrant to Wall Street Legend can be found on Amazon along with Joshua M Green’s other books. CLICK HERE to purchase or head to https://www.amazon.com/Unstoppable-Astonishing-Auschwitz-Penniless-Immigrant/dp/164722215X.

For more information or the chance to learn more CLICK HERE or head to https://unstoppablesiggi.com/.