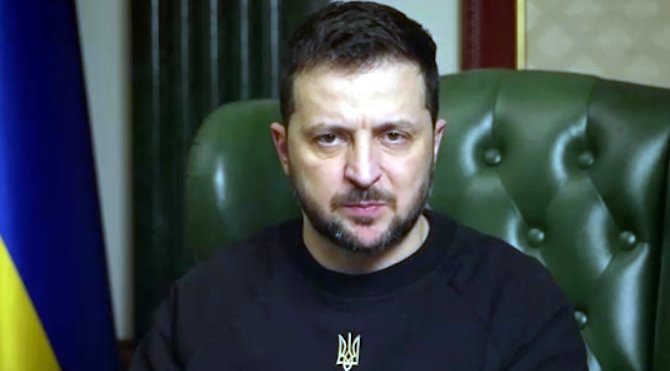 Volodymyr Zelenskyy, the President of Ukraine, announced on Tuesday, January 10, that he had decided to relieve opposition politicians Viktor Medvedchuk, Taras Kozak, Renat Kuzmin, and Andriy Derkach, of their Ukrainian citizenship, according to the TASS news agency.

In a video message posted on his official Telegram channel, Zelensky said: “Based on the materials that were prepared by the Security Service of Ukraine and the State Migration Service of Ukraine, and in accordance with the constitution of our country, I decided to terminate the citizenship of four persons”.

He continued: “These are: Andrey Leonidovich Derkach, Taras Romanovich Kozak, Renat Ravelevich Kuzmin and Viktor Vladimirovich Medvedchuk”. Zelenskyy added that these were “not the last such decisions”.

Zelenskyy added that his recent decrees had stripped the citizenship of 13 clerics of the canonical Ukrainian Orthodox Church, against which the country’s authorities have recently stepped up persecution.

He performed the same action against former members of parliament Ihor Vasylkovskyy and Vadym Rabinovych, oligarch Ihor Kolomoyskyy, and the businessman and head of Dnipropetrovsk Region’s territorial defence, Hennadiy Korban.

Ukraine has long been politically persecuting Medvedchuk, who served as head of the political council of the country’s now-banned Opposition Platform – For Life (OPZJ) party, and who is known to be pro-Putin.

On April 12, 2022, Zelenskyy reported that Medvedchuk had been detained. He was detained on charges of treason and violating the laws of war. In late September, Medvedchuk left Ukraine as part of a detainee swap.

Kozak and Kuzmin were also elected to the Verkhovna Rada representing OPZJ, while Derkach was an unaffiliated MP.

In May 2020, Derkach made recordings public of telephone conversations. He alleged that former Ukrainian President Petro Poroshenko was communicating with current US President Joe Biden and which confirmed US interference in Ukraine’s internal affairs.