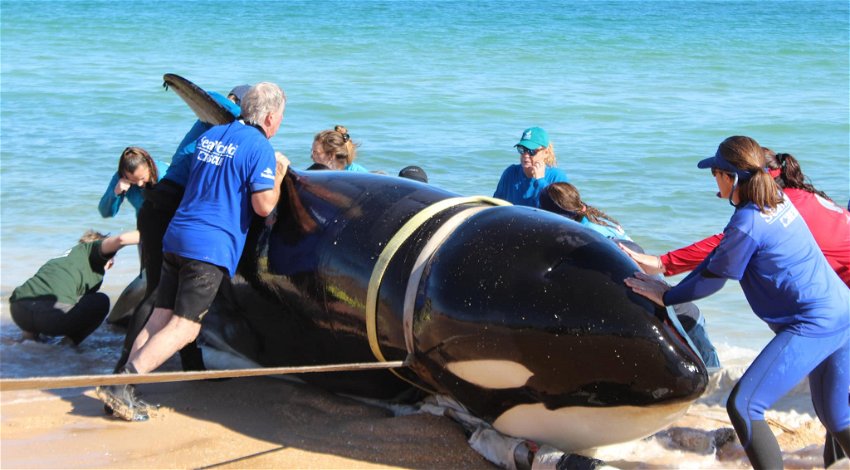 THE 21-foot orca whale that beached itself in Florida on Wednesday, January 11 has sadly died.

“Deputies are on scene south of Jungle Hut Park in Palm Coast after a 21-foot orca whale beached itself this morning,” the sheriff’s office wrote on Facebook at the time.

“It has since lost its life.”

It added: “Marine biologists with SeaWorld and officials with MyFWC Florida Fish and Wildlife are also assisting with its necropsy and removal.”

After beaching itself on the sand, the whale gained lots of visitors and caused huge traffic jams in the area.

Following a huge effort, the deceased whale was finally removed from the beach.

“Our thanks to SeaWorld and MyFWC Florida Fish and Wildlife for their help in removing a 21-foot orca whale from the beach near Jungle Hut Park in Palm Coast,” an update read.

“A necropsy will be done to determine the cause of death.”

The orca was stranded on the beach of Jungle Hut Park, in the town of Palm Coast, about 461 kilometres north of Miami.

Generally, killer whales (Orcinus orca), the largest animal in the dolphin family, have their habitat in cold climates and near coastal areas, but they migrate at certain times of the year.

People commented on the death of the orca death.

“Can’t people see our large whales and oceans are in peril? What’s it going to take to make people understand life is fragile and we are not helping it.”

They added: “This is an Orca but our Right Whales are down to less than 350 in the ENTIRE WORLD! Doesn’t that send alarm bells off?

“FLORIDA and Georgia are the primary birthing grounds for Right Whales and it’s happening right now out there in the Atlantic Ocean off our coast.”

While another person wrote: “I wish we would stop polluting, poaching and hurting our beautiful creatures. They deserve to live a free life too. So sad.”

A statement from the Flagler County Government read: “As most of you are aware, we are sad to report that a female orca was beached at the south end of Jungle Hut beach in Flagler County today.

“SeaWorld will be performing her necropsy to establish the cause of her death.”

It added: “We want to thank our Flagler County staff who came together in order to assist SeaWorld as they moved this 7,000lb whale off the shore and on the road to Orlando.”