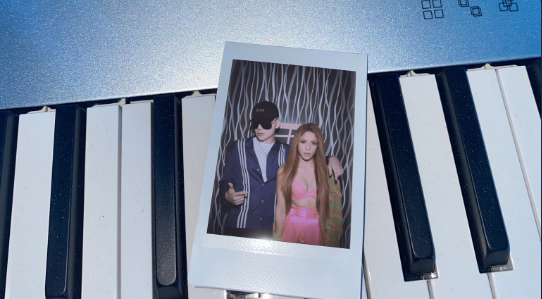 MULTY-AWARD-WINNING singer Shakira, 45, has been accused of plagiarism after the released her song with Bizarrap in which she took several shots at her ex-husband Gerard Piqué and his current partner, Clara Chía.

Shakira took several shots at her ex-husband Pique in the song, which she has been accused of plagiarising.

A full list of lyrics provides multiple daggers thrown at the former Barcelona defender, who was with the Colombian singer for 11 years.

“I’m sorry, I’ve already taken another plane, I’m not coming back here, I don’t want another disappointment. You’re such a champion and when I needed you, you gave your worst version.

“This is for me to mortify you, chew and swallow, swallow and chew. And with you I won’t come back, nor will you cry or beg me. I understood that it’s not my fault that they criticise you, I only make music, I’m sorry that I sal-pique you.

“You left me as a neighbour to my mother-in-law, with the press at the door and the debt at the Treasury. You thought you hurt me and you made me tougher. Women don’t cry anymore, women invoice.

“From love to hate there’s only one step, don’t come back here, listen to me. No hard feelings baby, I wish you well with my supposed replacement. I don’t even know what happened to you, you’re so weird I can’t even tell you apart. I’m worth two out of 22. You traded a Ferrari for a Twingo. You traded in a Rolex for a Casio.

“You’re going fast, go slow. A lot of gym, but work your brain a little too. Pictures where I’m seen, I feel like a hostage here. That’s fine with me. I’ll unload you tomorrow and if you want to bring her along too.

“I’ve outgrown you and that’s why you’re with a girl just like you.”

Since the song was released, many people compared it to another song by a young female singer.

Venezuelan singer Briella took to TikTok to point out that the BZPR (Bizarrap) song with the Colombian singer sounds very similar to one of her own songs.

She accused Shakira of plagiarism and appeared to have provided proof.

The singer claims that Shakira’s new song, which takes aim at Pique, shares similarities with her single ‘Solo tú’, which was released on July 1, 2022.

People commented on the accusations.

“Yeah man. Shakira mutilates Pique by plagiarising another song. So that now they come to him with legal issues and he has to spend the money on compensation and stories 🤣 Pique is at home petting a kitten, 0 doubts,” another person wrote.

While another person accused Shakira of plagiarising more songs.

“Has Shakira ever plagiarised/covered/sampled a song?” the person asked.

“Do you think Shakira and/or BZRP copied Briella’s melody? What do you think?”