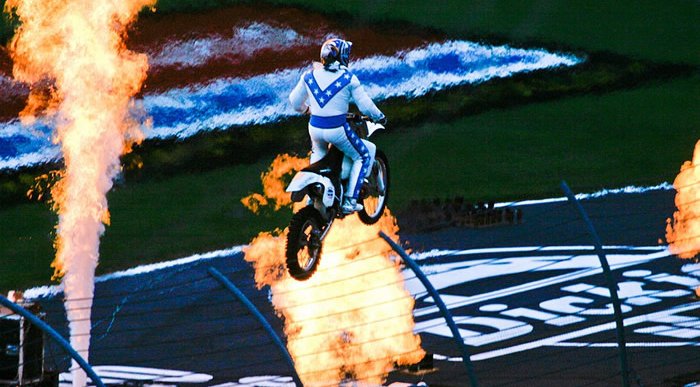 After a lengthy battle with pancreatic cancer, Robbie Knievel, the daredevil son of the legendary Evel Knievel passed away at the age of 60.

Renowned daredevil Robbie Knievel – the son of the legendary Evel Knievel – passed away in a hospice early this morning, Friday, January 13, after a long battle with pancreatic cancer. He was 60 years old, as reported by the celebrity news outlet, TMZ.

Going under the name of Kaptain Robbie Knievel, he inherited his father’s love of death-defying motorcycle jumps. Throughout his career, Robbie notched up an incredible total of more than 340 such stunts, setting 20 world records in the process.

Robbie took over where his iconic father – Robert Craig ‘Evel’ Knievel – left off after his death in 2007 from pulmonary disease, aged 69. Evel Knievel was a massive star in the 1970 and ’80s, famous for his elaborate and often extremely dangerous stunts. He was inducted into the Motorcycle Hall of Fame in 1999.

The number of accidents and broken bones suffered as a result of his stunts is huge. One of his most famous jumps was a spectacular attempt to jump over the iconic fountains outside Caesars Palace. It was the longest distance he had ever taken on, at 141 feet (43 m). This massive event was staged on December 31, 1967, during which he crashed and ended up in hospital.

At the young age of four, Robbie Knievel started making jumps with his bicycle and graduated to motorbikes by the time he was seven. He performed his first show with his father at Madison Square Garden while only eight years old.

In homage to his father, on April 14, 1989, Knievel jumped the Caesars Palace fountains. He landed safely and became the first to successfully jump the fountains. Following the jump, the daredevil stated, “that was for you, Dad”.

On July 10, 1993, Knievel challenged British motorcycle stuntman Eddie Kidd to a world title ‘jump off’. He considered the Brit to be his only competition in the world at that time. The event – titled ‘The Daredevil Duel, Knievel vs. Kidd’ – took place in Bay St. Louis, Mississippi, with Kidd the eventual winner.

Knievel performed the famous Snake River Canyon jump on May 20, 1999. Robbie jumped his motorcycle for a personal record of 228 feet (69 m). However, he lost control of the bike on landing and broke his leg in the ensuing crash.

In 2011, Robbie jumped 150 feet above tractor-trailer trucks at the Spotlight 29 Casino in Coachella, CA as his final stunt.