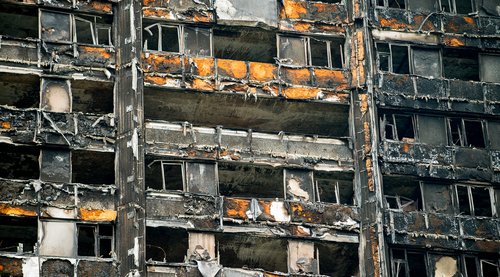 Dozens of firefighters involved in saving the lives of Grenfell Tower residents and in bringing the blaze under control are reported to be suffering from cancer.

An exclusive report by the Mirror on Friday, January 13 found that a number of those involved in fighting the fire that killed 72 people have been diagnosed with rare forms of cancer.

Exposed to high levels of contaminants they are said to be digestive cancers and leukaemia, for which there is no cure. With some cancers taking up to 25 years to appear, firefighters are concerned that many more may begin to present symptoms and that many will die long before their natural life ends.

But it is not just the firefighters who are at risk with the possibility that many residents will also suffer the same fate. Those involved in the disaster have called for health screening after around a dozen were discovered to have cancer after an investigation by experts.

A fire service spokesperson said: “We are expecting some really depressing data to be revealed soon. It’s shocking.”

Many of the firefighters were over-exposed after running out of air on upper floors or being caught in smoke-filled rooms for between six and 10 hours. Around 1,300 firefighters were involved in the blaze but it is not clear how many have been overexposed.

A University of Central Lancashire study in 2019 found soil contamination in the area and an analysis of the materials used in the cladding found heightened concentrations of cancer-causing chemicals. This included proven carcinogens like benzene within 200m of the tower.

That study found that as many as four per cent of the firefighters involved had been diagnosed with cancer. That rate is some 32o per cent higher than the general population.

Those involved are calling for regular health checks Riccardo la Torre, a Fire Brigades Union national official, said: “When workers on the front line are tackling fires to save lives and property, like all those who attended Grenfell, they need every protection possible from toxic health risks.

“This vital research proves that firefighters are suffering and dying from cancer, strokes, heart disease, and mental ill health as a result of going to work and protecting the public.

“We now know that firefighters are exposed to health and life-threatening contaminants as a result of their occupation, and certainly would have been at an incident the size and scale of the Grenfell Tower Fire.

“However, firefighters are left in the dark due to the lack of regular health surveillance and proper monitoring of exposures in the UK.

“Due to this inaction by the government and fire bosses, the Fire Brigades Union is commissioning further research to help us demand proper protection and support for our members who attended Grenfell, and for firefighters all over the UK.”

Much of the contamination is thought to have come from exhausted firemen taking a breather outside the building, taking on essential liquids and food. Experts believe that food ingested at the time could be responsible for the high levels of cancer, as could the poor quality of air due to the fire.

A London Fire Brigade spokesperson said: “Our firefighters must be as safe as possible when doing their jobs and we are currently involved in two studies to investigate the possible impact of contaminants on health, including one directly linked to the Grenfell Tower fire.

“All firefighters and officers who attended Grenfell have been invited to take part in the research project, which carefully monitors their health even after they retire or leave the service.

“Staff also have access to our occupational health service to support them through periods of ill health.”

The National Fire Chiefs Council (NFCC) said: “It is recognised that whilst firefighters carry out their role, they are exposed to contaminants.

“It is acknowledged that incidences of some cancers in firefighters are higher than the average.

“The National Fire Chiefs Council is committed to ensuring the ongoing, improved safety of all firefighters, making full use of the evidence and knowledge available.”

Adding that the “NFCC is committed to working in partnership with all interested parties, including unions, universities, fire services and the wider industry.”

The scandal that was the cladding disaster just won´t go away with many buildings still to be repaired and many Grenfell Tower firefighters diagnosed with terminal cancer.