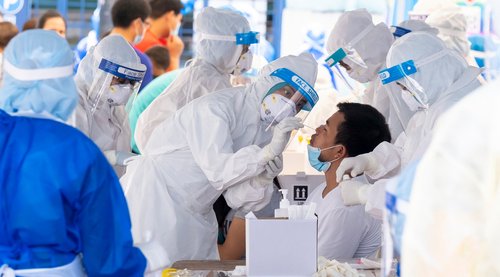 After months of underreporting and claims that China has COVID-19 under control, it has finally given a clearer picture of the true situation reporting more than 60,000 deaths in December.

China, which dropped its zero-tolerance policy after public protests, had been criticised across the world for supplying inaccurate data. That led to travel restrictions being placed on its citizens and some tit-for-tat responses.

But on Saturday, January 14 it finally started to come clean, a first step in providing the true picture of the spread of the virus in the country. It’s also the first time that China has publicly acknowledged that its strategy to shield its people from the virus, rather than to inoculate them had failed.

According to Sky News, the Chinese government claims that the peak of the surge has passed with those dying having an average age of 80.3. It also said that the majority of the deaths came from complications caused by a combination of COVID-19 and other illnesses.

The figures reported suggest that in the first week of January, the death toll exceeded 10,000. Authorities clarified that the death toll relates to only those that died in hospital suggesting that the real number is considerably higher.

Jiao Yahui, an official from the National Health Commission, told a news conference that: “the number of fever clinic visitors is generally in a declining trend after peaking, both in cities and rural areas.”

She added that the number of infections was also falling with the ratio of patients who tested positive declining as well.

Despite the increased openness of authorities, there is still scepticism regarding the figures and the trend of infections. China has significantly scaled back its testing programme, plus hospitals and mortuaries remain full.

Although China has finally come clean and reported more than 60,000 COVID-19 deaths, travel restrictions remain in place with countries like the U.S., UK and Italy conducting their own research to fully understand the level and seriousness of infections.