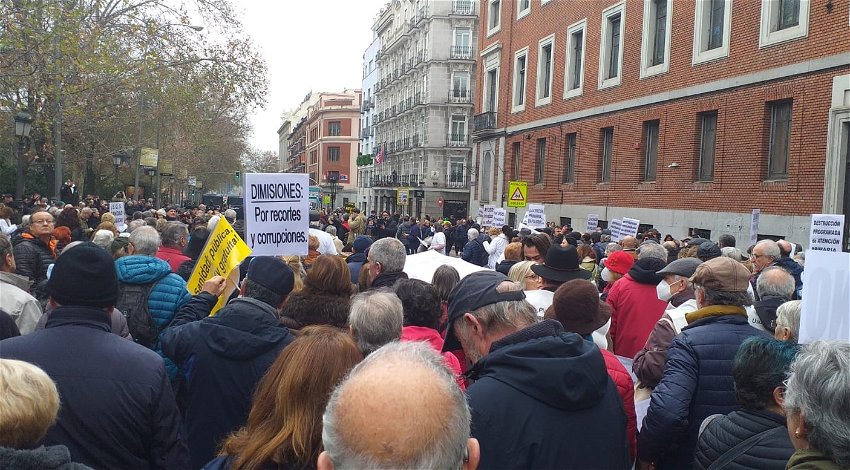 Health workers organise a major protest in Spain´s capital Madrid, demanding an end to cutback and privatization of healthcare in the region

Tens of thousands of people marched to the center of the Spanish capital stating that the conservating regional government is destroying the public healthcare system.

The protesters filled the main boulevard, which runs adjacent to the city´s El Prado museum, as a part of what they call Marea Blanca or white tide of demonstrators.

The protest was organized after primary healthcare in the autonomous community have been facing major pressure due to lack of staff or resources, for several years now.

Due to this reason, areas such as hospital emergencies are now overwhelmed with patients, across several public hospitals in the state.

“We have about 40 or 50 patients per day and can give them about six minutes each. The problem is that they do not allow us to give proper care to patients”, said Ana Encinas, a doctor with over 30 years of experience from Madrid, cited by Reuters.

Led by the Popular Party’s Isabel Ayuso, Madrid’s regional government has come under fire in the recent year, especially since the start of the COVID-19 pandemic.

The protesters claim that the regional government favors private health and is working towards dismantling the public healthcare system.

Meanwhile, Ayuso denies the accusation and states that all the protests and strikes have been orchestrated by the left-wing parties in the region.

She also claims that they are doing this in the run-up to the elections this year, to undermine the work of the conservative government.

Protests in Madrid were earlier also organised by primary care doctors and pediatricians in November, who had planned an indefinite strike.

This strike was later suspended after a month for the Christmas break.