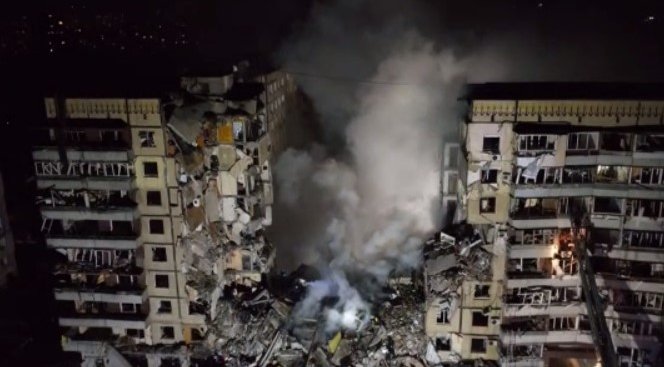 Ukrainian boxing coach Mikhailo Korenovsky was among those to perish when a Russian missile destroyed a residential block in the city of Dnipro, Ukraine.

Ukrainian boxing coach, Mikhailo Korenovsky, has been revealed as one of the victims who died following Russia’s cruise missile attack on a residential building on Saturday, January 14. He was the head trainer of the Dnipro boxing team and a former pupil of the Odesa Boxing School.

A poignant video uploaded onto social media showed Mikhailo only recently enjoying a party with his family in the very same apartment block.

The video shows his family and him at the same kitchen, the photos of which we published earlier today.#RuWarCrimes_UW #ISAREdnannia https://t.co/yKYWn9KqJz pic.twitter.com/0fZhZOlu4r

The death toll is reported to have risen to 29 in the aftermath of the search and rescue operation that was being carried out. Teams aided by sniffer dogs worked at the site in the hope of pulling more residents out alive.

It was estimated previously that at least 72 apartments were destroyed when the nine-storey building collapsed to the ground.

President Volodymyr Zelenskyy spoke of the terrible tragedy in his daily Telegram post: “Today I have been receiving reports from Dnipro all day. The debris is being cleared there. All necessary services are involved. Thanks to everyone who is carrying out the rescue operation!”.

He continued: “As of now, the fate of more than 30 people who could have been in the house at the time of the terrorists’ missile hit remains unknown. Dozens of people were rescued from the rubble, including six children. We are fighting for every person! The rescue operation will last as long as there is even the slightest chance to save lives”.

“Since the attack, Ukraine has heard words of condolences and support from many leaders, public figures, journalists and ordinary people from around the world. I thank everyone who did not remain indifferent! It is very important that normal people unite in response to terror. Glory to Ukraine!”, he concluded.