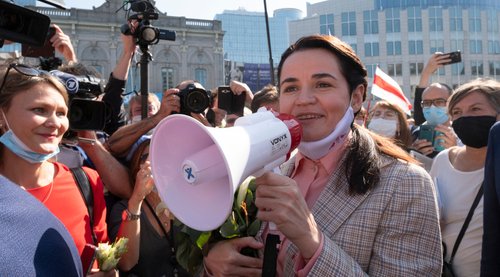 Tsikhanouskaya, 40, fled Belarus after the last elections in 2020, which many said were fraudulent. Mass protests led by Tsikhanouskaya and her colleagues led to their arrest and her fleeing the country.

The outspoken Lukashenko critic told the Reuters news agency on Tuesday, January 17 that the court case would be a “farce and a show” designed to quell any further dissension in the country.

If found guilty she faces up to 15 years in jail.

Lukashenko, who came to power in 1994, declared himself the winner of the 2020 election after which he cracked down on the opposition and protestors. As a result, she moved to Vilnius in Lithuania where she remains today.

Speaking at the Swiss resort of Davos where she is attending the World Economic Forum she said she did not expect a fair trial, saying “In Belarus there are no honest trials.

“We live in absolute lawlessness in our country so tomorrow’s trial will be a farce and a show but not real justice.”

According to BelTa, the state news agency, the case began today with Tsikhanouskaya and several others to be tried on charges of treason and attempting to seize power.

The charges state: “Tsikhanouskaya, while on the territory of the Republic of Lithuania, proclaimed herself the winner of the last election… and the only national leader elected by the Belarusian people.”

Her husband remains in jail but now faces new charges. He was arrested in 2020 after running against Lukashenko. It was his arrest that prompted Tsikhanouskaya to run for office in his place.

Despite having no public profile she was allowed to stand for office in a country that is a pariah in the West, but a close ally of Vladimir Putin. Human rights campaigners suggest around 1,500 people remain in jail on politically motivated charges.

Also charged this month are activist and Nobel Peace Prize laureate Ales Byalyatski, and two others, who have been accused of financing protests and smuggling money.

Since Russia´s invasion of Ukraine, the Belarus leader has tightened his grip on the country filing charges of treason against the exiled opposition leader and others.