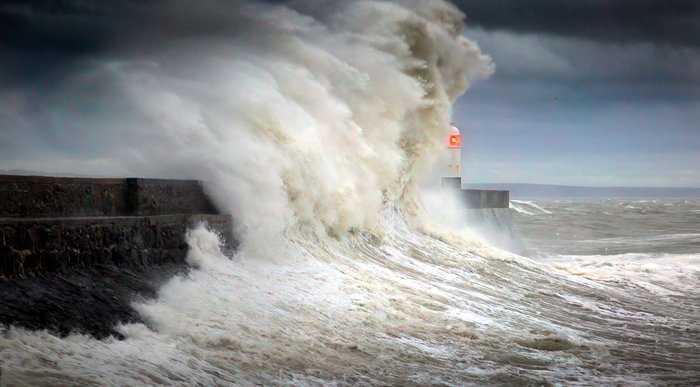 Storms Gerard and Fien have already caused havoc in Spain creating nine-metre waves on parts of the Cantabrian coast.

Storms Gerard and Fien are poised to plunge Spain into a storm of snowfall, rain, high waves and strong winds this week. The Cantabrian Sea already generated gigantic waves reaching nine metres in height which caused a red warning to be issued this Monday, January 16 in Catalonia.

Northern regions of Spain are expected to bear the brunt of these two storms, with low temperatures affecting most parts of the country. Atlantic coastal areas have seen promenades and beaches closed, as well as parks in the city of A Coruña.

Some inland regions were hit by intense winds which triggered warnings in different provinces of Castilla y Leon on Monday. Snow began to fall in the higher parts of the country, leading to road closures.

Three towns in the Navarrese Pyrenees – Isaba, Uztarroz and Urzaiqui- were left without power for several hours due to a fault caused by the severe weather.

Several provinces of Castilla y Leon are at risk due to this phenomenon. Most at risk are the mountains of Leon, the region of Zamorana de Sanabria, and the city of Segovia, which has initiated the snowfall alert.

However, the waves and the snow are not the only phenomena that have wreaked havoc in the Northwest. The rain is also punishing the area, causing several rivers in Cantabria and Galicia to burst their banks. This subsequently triggered an alert in various parts of Castilla y Leon.

Due to the water, at 4pm, the Provincial Council of Bizkaia closed the pedestrian accesses to the Hermitage of San Juan de Gaztelugatxe. In the Orense municipality of Vilamartin de Valdeorras, the heavy rainfall caused the collapse of a bridge with the consequent isolation of 40 neighbours.

According to the General Directorate of Traffic (DGT), at least 20 roads were cut throughout Spain this Monday due to the snow, rain and wind. Those most affected were in the Galician provinces of Lugo and Ourense, as well as Asturias, Cantabria, Soria, Burgos, Palencia, Navarra, Vizcaya, and Girona.

As we enter Tuesday 17, the maritime polar air is expected to head further into the mainland due to the Azores anticyclone and a large depression system in Europe. According to Meteored, they are associated with a planetary trough loaded with cold air in the middle and upper layers.

Storm Gerard is predicted to undergo a rapid process of cyclogenesis, which will be followed by Fien. This will ‘intensify the northwesterly flow’ warned the weather experts.

According to the meteorological forecasts of AEMET, the State Meteorological Agency, the storms will cause a drop in the mercury and leave high waves on the Spanish coasts, except in the Canary Islands.

Waves of up to 9 metres are expected in the Atlantic and the Cantabrian Sea and between 3 and 4 metres in the Mediterranean. As a result, a red weather warning was issued in the Basque Country on Monday and for today, Tuesday, in Galicia.

Strong winds are expected to blow this Tuesday in the Balearic Islands and in the northern and eastern half of the country, with gusts that could exceed 90km/h, according to AEMET, as reported by 20minutos.es.