Teachers to strike for seven days in February and March 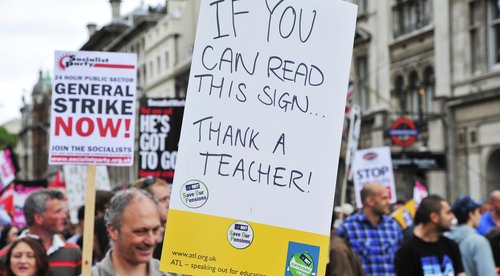 Teachers overwhelmingly voted for strike action that will take place over seven days spread across February and March in a dispute over pay.

The National Education Union (NEU) told Sky News on Tuesday, January 17 that the threshold required to take strike action had been reached after balloting its 300,000 members.

NEU, the largest education union, said that its members were looking for a “fully funded, above-inflation pay rise.”

A statement issued by the union said nine out of ten members voted to take strike action and that teachers were not prepared to “stand by” and see the education service “sacrificed” due to “a toxic mix of low pay and excessive workload.”

Dr Mary Bousted and Kevin Courtney, joint General Secretaries of the NEU, said: “We regret having to take strike action and are willing to enter into negotiations at any time, any place, but this situation cannot go on.”

Agency staff and volunteers will be free to cover classes for the walkouts, which will take place on 1, 14 and 28 February and 1, 2, 15 and 16 March. The strikes are expected to affect 23,000 schools across England and Wales.

Education Secretary Gillian Keegan described the strike action as “deeply disappointing for children and parents,” however, there was good news for the minister with the National Association of Head Teachers (NAHT) ballot turnout failing to meet the 50% legal threshold.

The NAHT said that it was considering another vote in the near future, with disruption to postal services said to have been a factor.

With the country already hard hit by the largest number of days lost to strikes in more than a decade, the news that teachers are to strike for seven days will be met with frustration and despair.