Henry Kissinger insists Ukraine should become a member of NATO 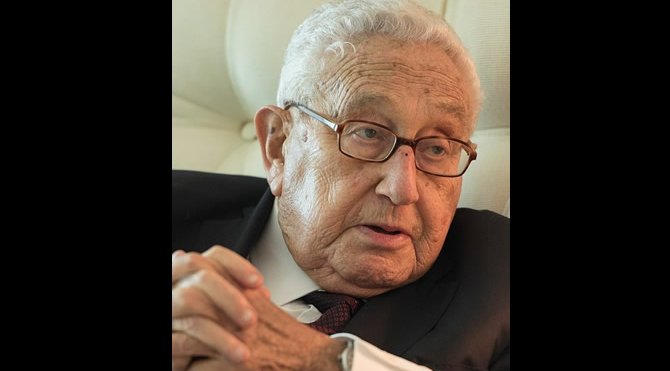 Ukraine should become a part of NATO insisted the former US Secretary of State Henry Kissinger.

During an online speech at the World Economic Forum in Davos on Tuesday, January 17, former US Secretary of State Henry Kissinger insisted that Ukraine should become a part of NATO.

“The idea of ​​a neutral Ukraine in these conditions no longer matters. I believe that Ukrainian membership in NATO will be an expedient action”, said the highly respected 99-year-old German-born American diplomat.

The former National Security Advisor to US Presidents Nixon and Ford explained that he had previously opposed Ukraine’s membership in the North Atlantic Alliance because of the fear that this could provoke “exactly the process that is now observed”.
According to him, Washington should continue to support Kyiv, and, if necessary, increase its military assistance until a ceasefire can be achieved.
In an article for the Spectator, Kissinger previously outlined his ideas about how he sees the future relationship between Russia and Ukraine, as well as the European security architecture.
He suggested that in this conflict, it was time to take advantage of the changes made and turn them into a “new structure” to reach an agreement. At the same time, the geopolitical consultant called the absence of Russia in the new world order after the end of the conflict in Ukraine, “unacceptable”.
Russia previously sent a note to NATO countries about to the supply of weapons to the Armed Forces of Ukraine. Foreign Minister Sergei Lavrov emphasised that any cargo containing ammunition and military equipment would become a legitimate target for the Russian military in the neighbouring republic.
The Foreign Ministry also stated that the states of the North Atlantic Alliance were “playing with fire” by supplying ammunition to the Kyiv regime, as reported by ria.ru.