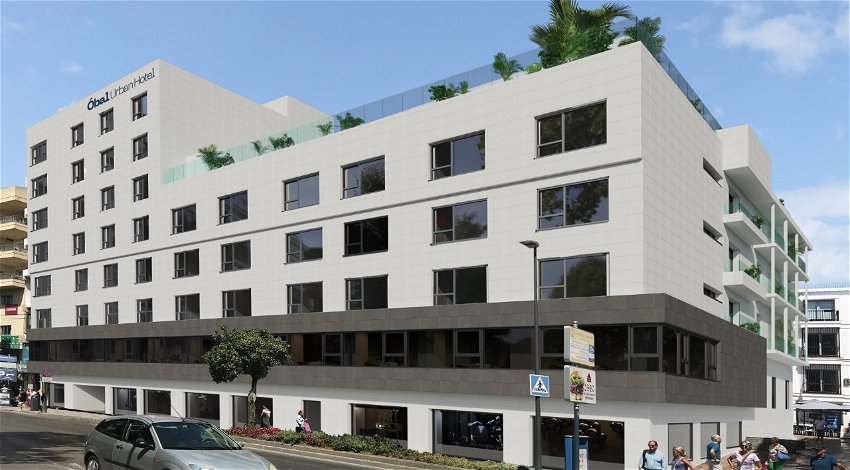 After a complete refurbishment and an investment of more than 6 million euros, the historic hotel in Marbella is entering a new phase.

The 110-room city hotel has been upgraded to four stars and is being relaunched by the family-owned Solvento Group holding company. With mouthwatering gastronomy and shining its light to tourism, the Óbal hotel aims to become and return as a local and regional hotel reference once again.

After months of intense work, the new hotel is taking shape. Growing from 100 to 110 rooms, the expansion has also called for a gym, a massage room and restaurant ‘Alameda’. Which will serve Mediterranean cuisine, market, and local products and with touches of traditional Malaga cuisine and 360º Blue Sky Bar, a rooftop with swimming pool relaxing area including a more casual menu full of healthy proposals, select cocktails, a variety of juices, coffee, and teas. A wide range of quality services will be available for both guests and Marbella’s society.

The new establishment will run with an average of 60 employees, adding new incorporations, including a food and beverage director and a chef to enhance what the gastronomy has to offer.

The presentation of the new concept and name of the hotel took place this morning at the Marbella stand within the framework of Fitur 2023, with the presence of the entire Parra family and the Delegate of Tourism of the Andalusian Regional Government in Malaga, Gemma del Corral, as well as the Mayoress of Marbella, Ángeles Muñoz.

The company has presented the renderings of the new establishment, as well as the new website from which reservations can be made three months before its opening: www.obalhotelmarbella.com. In addition, three pilot rooms in the main categories (classic, junior and premium) are scheduled to be completed by the end of February.

Cristóbal Parra Jiménez, who bids farewell to management with this event, outlined the company’s vision during the Fitur event, stating that “Óbal Urban Hotel wants to strengthen its leadership in holiday hotels and in the urban segment in Marbella and the Costa del Sol”.

The common thread that inspired the new name of the establishment is the roots of the family business founded by grandfather Cristóbal Parra when he arrived in Marbella in the 1940s and started his first business dedicated to farming and grape cultivation.

“We are an iconic hotel, with a long legacy, a lot of history, and although with the new name and the complete refurbishment we have sought an absolute change, we have not wanted to lose our origins. The name of the iconic Marbella hotel, “San Cristóbal”, came about in reference to its founder and coinciding with the patron saint of travellers, drivers, and transporters”.

The new name “Óbal” arises, on this occasion, from the search for a suitable name for a product with well-defined roots, but we wanted to build a whole identity structure that fits in with and contributes to defining the new modernised corporate image of the establishment. This is why it was not enough for us to simply look for a name that sounded good or was easy to memorise.

We have tried, above all, to give relevance to our product and its history, to attract the attention of our customers, hence the idea of keeping part of the original name”, explains Manuel Murga, director of Óbal Urban Hotel.

“On the other hand, by adding the concept of “Urban Hotel” to the name, we wanted to cover the client who is looking to stay in Marbella not only for holiday tourism, but also for a more metropolitan concept of establishment located in the centre of the city and focused on the corporate sector,” says Murga.

The change of identity has also affected the family holding company, which has become Solvento Group (formerly Crisan Group), with the Aqua tourist flats, to which new units have been added in Malaga, as well as Óbal Urban Hotel and the management of commercial rentals.

“We feel great pleasure, especially because the family is still very cohesive and fully involved in the continuity of all the group’s projects. Moreover, when I refer to the family and to Solvento Group, I am also thinking of all the employees who are part of the company”, says Francisco Giménez Pérez del Pulgar, CEO of the group.