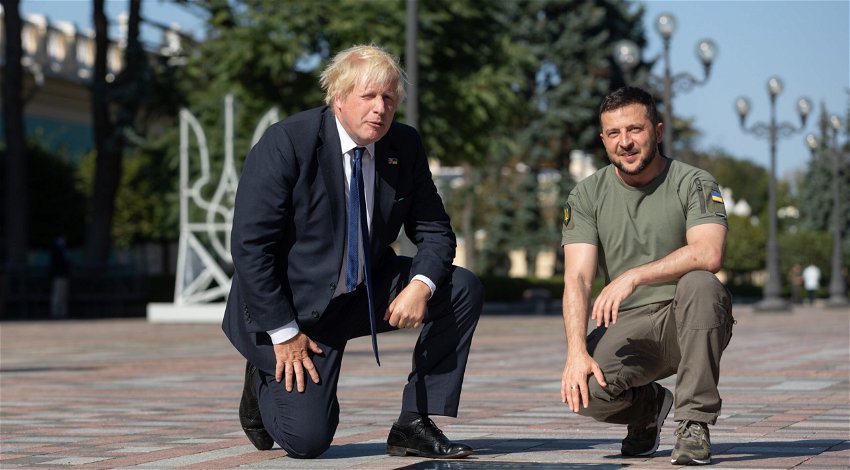 Boris Johnson was awarded the ‘Citizen of Kyiv’ honour by the Ukrainian mayor during the World Economic Forum in Davos, Switzerland on January 19.

“Talked in Davos with Boris Johnson, a great friend of Ukraine,” Klitschko said on Telegram.

“I had the opportunity to present him with an award from the Ukrainian capital – the title of Honorary Citizen of Kyiv.”

He added: “The decision on its assignment was approved by the Kyiv City Council at the end of November last year.

“Boris repeatedly visited the Ukrainian capital – both in peace and in the most dramatic time of our struggle against the Russian aggressor.

“As Prime Minister of Great Britain, Johnson did everything possible to help Ukraine. And continues to support us and convince the civilised world of the necessary support.”

A video of the presentation, which was shot at the Ukrainian House in Davos, revealed that the former UK PM was considered a ‘big friend’ of Ukraine.

Vitali flanked by his brother Wladimir said he was thankful for ‘everything’ Johnson had done for Ukraine.

“And this will be great to see all people pull together.

“United in this critical moment for our country. And right now, I have a special mission.

Boris enthusiastically thanked the Kyiv mayor and stated that ‘Putin had made a catastrophic mistake’ attacking Ukraine.

“Thank you very much.”

He added: “Vladimir issued one of my passport. Thank you very much. Freedom pass. My freedom pass for the Kyiv metro and I just want to say what a huge honour this is.

“I first met Mr. Mayor many years ago when I was mayor of London. And he came to see me, and he said, come to Kyiv, and I did when I was Foreign Secretary.

“And you very kindly gave me a tour of your city, your beautiful, beautiful city. And I talked to many Ukrainians. And I realised then, that if Putin was ever so mad as to invade Ukraine, that Ukrainians would fight and that they would win. And that is what is going to happen.”

“And there is no doubt in my mind at all that Putin has made a catastrophic mistake,” he continued.

“And the only thing that we, in the friends of Ukraine, have got to do now is to continue our support for Ukraine with tanks, with planes with whatever it takes. With financial resources until Ukraine wins, and Ukraine is once again a free, sovereign and independent European country.

“Thank you very much. Thank you.”

⚡️ Vitalіi Klуtschko in Davos presented Boris Johnson with an award – the title of Honorary Citizen of the city of Kyiv. pic.twitter.com/XtUv3OkF4N