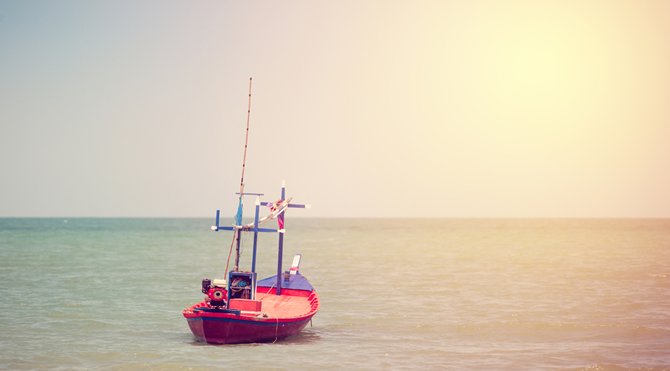 Image of a small boat at sea. Credit: Pushish Images/Shutterstock.com

A man claimed he survived on just tomato ketchup mixed with garlic powder and stock cubes while lost at sea for 24 days.

According to the Colombian Navy authorities, a man who was lost at sea for 24 days survived only on tomato ketchup mixed with garlic powder and stock cubes. The resident of the island of Dominica was finally rescued after an aircraft spotted him drifting in the Caribbean.

In an English-language video released by the Colombian Navy, 47-year-old Elvis Francois is seen being examined by a Navy doctor. He explained: “I had no food. There was only a bottle of ketchup that was on the boat, garlic powder and Maggi stock cubes. So I mixed it up with some water for me to survive 24 days in the sea”.

After an aircraft notified a merchant ship of Francois’s location, they picked him up. He was rescued in the northern department of La Guajira, some 120 nautical miles northwest of Puerto Bolivar in Ecuador. The sailor had reportedly carved the word ‘help’ into the hull of his sailboat.

Despite numerous attempts to attract the attention of passing vessels, Francois remained drifting at sea. At one point he even lit a fire on his boat to try and signal. Towards the end of his experience, he was regularly bailing water from his boat in order to stay afloat.

Francois continued: “The final days, about the 15th of January, I saw a plane. I had a mirror. I was making some signals. They passed over the boat twice so I realised they saw me. I am grateful for being alive today because of them”.

The aircraft immediately notified the Navy who then redirected a merchant ship to his location. “24 days, no land. Nobody to talk to. Don’t know what to do. Don’t know where you are. It was rough. At a certain point, I was losing hope. I thought about my family. It was very rough. I don’t know how I am alive today but I am alive. And I am grateful for that”, he concluded.

A statement from the Navy revealed that Francois was swept out to sea after the weather turned while he repairing a sailboat in a harbour on the island of St. Maarten in the Netherlands Antilles region of the Caribbean. He was subsequently handed over to the immigration authorities in Ecuador who arranged for him to be repatriated.

“Without having any knowledge of navigation he was lost and disoriented at sea. His efforts to manoeuvre the vessel and the equipment on board were to no avail”, it pointed out. Francois apparently tried using his mobile to call for help but his battery died, as reported by insiderpaper.com.