Spain and France sign ‘friendship and cooperation treaty’ in Barcelona 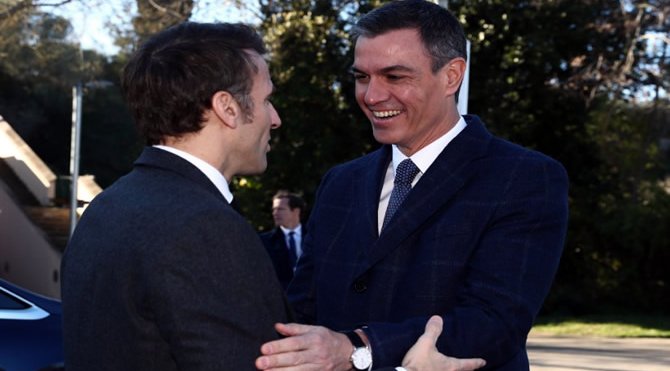 A ‘friendship and cooperation treaty’ has been signed between Spain and France as a result of the bilateral summit in Barcelona.

A meeting took place in Barcelona this Thursday, January 19, attended by Pedro Sanchez , the Spanish Prime Minister, and Emmanuel Macron , the President of France. As a consequence, the two politicians signed a historic friendship and cooperation treaty at the XXVII Hispano-Francesa summit.

Pedro Sanchez tweeted: “The signing of the Treaty of Friendship and Cooperation between our countries is historic. It defines what we have built so far and what we aspire to be. In times of uncertainty we need certainty. The most important today is that when France and Spain advance, Europe advances”.

This deal will see both countries forge stronger ties relating to issues including energy, defense, and migration. At a time when the Paris-Berlin alliance is clearly showing signs of strain, Paris is looking to build better relationships with countries in southern Europe.

During the meeting, various topics will have no doubt been discussed. These most likely included the project to construct a huge underwater hydrogen pipeline that will link the cities of Barcelona with Marseille. This is looked upon as being Europe’s key in the search for future energy independence.

A potential row with Washington that is brewing with regard to green energy companies means Macron needs to bring the Spanish leader to his side to contest that battle. It is already feared that Europe will see itself in an unfair transatlantic trade position as billions of dollars are poured into climate-friendly technologies.

German Chancellor Olaf Scholz has so far shown himself to be unwilling to enter into any argument with Washington on this topic. He appears to favor dialogue instead of conflict, but Macron will still be hoping he can enlist him when the time comes, as reported by euronews.com .

Macron and the German leader will have another opportunity to discuss things when Scholz flies to Paris on Sunday 22. The two men will attend an event to celebrate the 60th anniversary of the Franco-German post-war friendship treaty.

While they were embroiled in their summit, both men would have been aware of protests that were taking place. In Barcelona, ​​​​pro-independence supporters took advantage of the fact that Sanchez was in the city and took to the streets.

In France meanwhile, in excess of one million demonstrators were reported to have taken to the streets of 200 cities nationwide . A national strike was called by the major trade unions calling on workers to protest against the President’s plan to raise the retirement age from 62 to 64. Violence flared in several cities as a result.