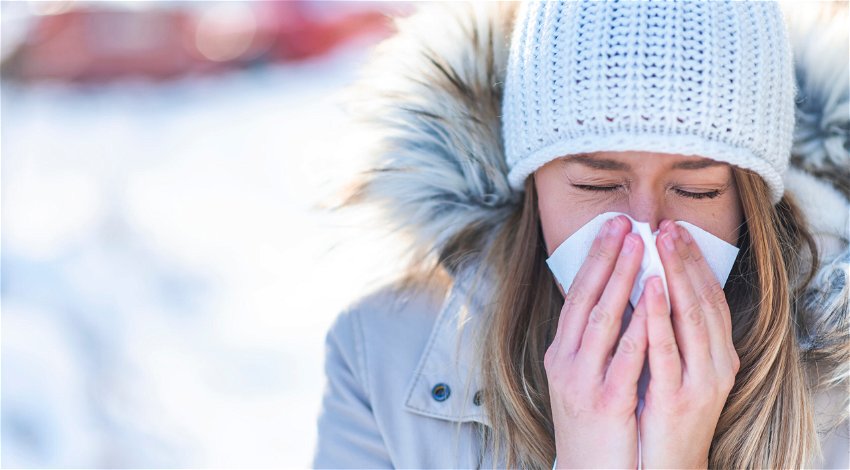 Image of a female blowing her nose in the cold weather. Credit: Dragana Gordic/Shutterstock.com

Temperatures of -15°C were recorded in one part of Spain during the current polar freeze and it even snowed on the Balearic island of Ibiza.

As confirmed by AEMET, the State Meteorological Agency, the Balearic island of Ibiza has met with unusual weather conditions thanks to the polar freeze currently affecting Spain.

This morning, Monday, January 23, residents of the town of Talaia de Sant Josep – located 475 metres above sea level – woke up to a blanket covering of snow. The town of Sant Joan de Labritja recorded -1.8°C overnight.

“We continue with very low temperatures and precipitation and with snowflakes at very low levels”, announced AEMET. “It is usual in January, although it is not every year that we have cold as intense as this”. This could even be accompanied by a storm and small amounts of hail they added.

According to AEMET, the lowest temperatures recorded overnight and so far today have been in the Pyrenees. In the Lleida town of Cal de Vaquera, it went as low as -15°C. Also in Lleida, Port Aine recorded 14.3°C. In Huesca, Cerler hit -13°C, and Astun with -12.9°C.

La Molina in Girona registered a minimum of -11.1ºC and in Granada’s Sierra Nevada region temperatures fell to -10.7 ºC, according to AEMET data.

Snowfall in the eastern Cantabrian and northern Iberian system and widespread frosts will predominate in practically all of Spain today say the experts. As a result, 12 autonomous communities have seen alerts issued for cold, wind, snow and high waves.

These are due to expected temperatures of between around -4v and -8ºC. Lleida and Huesca will be on orange alert for values ​​close to -10ºC.

The Community of Madrid maintains the yellow warning for minimum temperatures in the entire region where thermometers could reach -6ºC in the Sierra area and -4ºC in the rest of the region tomorrow morning.

In Mallorca, after a night of temperatures below zero, the Serra de Tramunta reached -2.3ºC. Snowfall of up to seven centimetres forced the closure of some sections of roads, the highest accumulation for five years.

Miquel Gili, the spokesman for AEMETS in the Balearic Islands informed Europa Press that the low temperatures could leave ‘good snowfall’ this Wednesday 25 in the north of Mallorca and the Serra de Tramuntana, in areas above 800m.