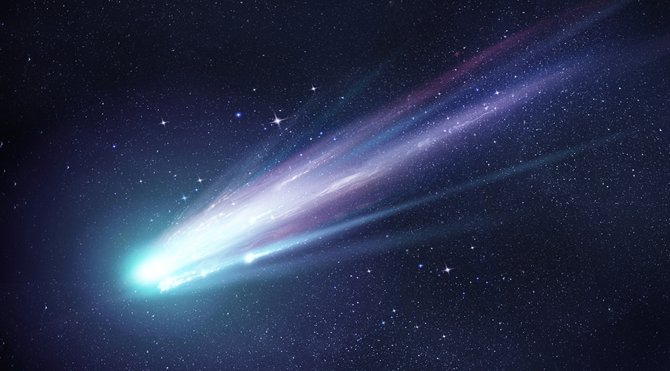 Image of a comet, NOT the 'Green Comet'. Credit: solarseven/Shutterstock.com

For the first time since the Stone Age, the ‘Green Comet’ will appear in the night sky.

At the start of next month, an astronomical phenomenon will occur for the first time since the Stone Age when homo sapiens were first roaming the Earth. That was the last time that the ‘Green Comet’ or Comet C/2022 E3 (ZTF) flew across the skies of our inner solar system,

It will make its closest pass to our planet on Wednesday, February 1. Experts believe that this could be the last time the comet will ever enter the inner solar system, due to the nature of its orbit. At the very least, experts believe it could be another 50.000 years before it appeared again in our system.

C/2022 E3 (ZTF) was discovered by astronomers at the Zwicky Transient Facility located in the Palomar Observatory in California as recently as March 2022. They were in the process of conducting a wide-field sky astronomical survey when they made the incredible find.

The experts believe the comet could have originated from the Oort Cloud. This is a region thought to contain billions of comets around the outer solar system. Most of these remain in stable orbits around the Sun though.

Since its discovery, the comet has reportedly become brighter and is visible in the early mornings in the northern hemisphere. On January 12 it made its perihelion – its closest approach to the Sun. As it passed the Sun, UV radiation heated the comet, making it shine brighter.

As a result, a hazy envelope from the heated gases and materials that are streaming off the comet’s surface, such as carbon monoxide, carbon dioxide, and water, produced a green-coloured coma.

Solar winds interacting with the comet’s coma create its short broad dust tail, and a longer, faint ion tail. The ‘Green Comet’s closest pass to the earth – its perigee – will occur on February 1, as reported by euronews.com.

In the northern hemisphere, the comet can currently be observed before dawn with the use of binoculars or a telescope. On February 1 it will be a distance of 42 million kilometres from Earth and could possibly be visible to the naked eye, also in the southern hemisphere.

Comets can be notoriously unpredictable, as pointed out by NASA, and are not always going to be visible. Currently, C/2022 E3 (ZTF) appears in the sky as a fuzzy green ball.

According to the Royal Observatory in Greenwich, London – a prediction which is subject to change – the comet is not expected to form any tail that will be visible to the naked eye. A telescope is recommended.