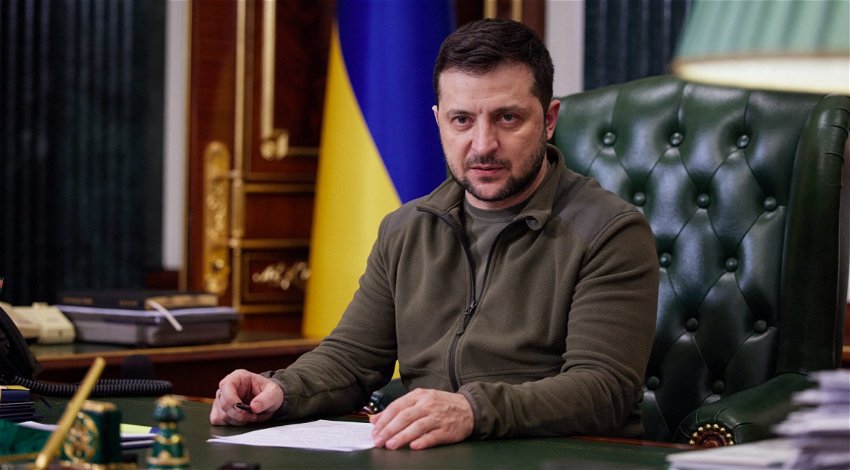 UKRAINIAN politician Viktor Medvedchuk, who recently had his Ukrainian citizenship relieved, has called on those who disagree with the regime of Ukraine’s President Vladimir Zelensky to unite.

In an interview with RT, Medvedchuk, a former People’s Deputy of Ukraine, urged for anti-Zelensky supporters to unite and said that Ukraine needs another voice.

“It is necessary for the voice of a different Ukraine to be heard in Russia, Ukraine and the West,” he said.

“And there is one. The “monolith” that Zelensky claims to represent is a monolith that has been sucked out of his finger. It is a monolith on bayonets. He represents Ukraine today and says that the Ukrainian people are united on the issue of anti-Russian hysteria and caveman Russophobia. This is not true.”

He added: “There are people who oppose Zelensky’s policies. This other Ukraine must be heard.

“It can be heard if its representative office appears… And I propose today to raise the question not about what the future of Ukraine will be like.

“Because today, in fact, Ukraine does not exist. There is no such state.

“I am a constitutional lawyer,” he continued.

“The Constitution states that Ukraine is an independent, sovereign, democratic, legal and social power. None of these requirements today corresponds to the status that Ukraine actually has.”

The Ukrainian politician, who is believed to have strong ties to Russian President Vladimir Putin, added that Ukraine ceased to be sovereign in 2014 when it came under external control.

“It has ceased to be independent and sovereign because since 2014 it has passed completely under the external control of the West, the United States and Britain,” he said.

“It is not social and legal today.

“Because the media are illegally closed in the country without a judicial and constitutional order, which directly provides for this, those who express a different point of view are destroyed…” he concluded.

Earlier this month, current People’s Deputy of Ukraine Geo Leros revealed that the Head of Ukraine’s Presidential Administration Andrii Yermak and Ukrainian President Volodymyr Zelensky could be out to have him killed after receiving numerous threats against him.

The 33-year-old wrote on January 5: “To the attention of the media and conscious citizens of our country!

“In recent months, I have been constantly receiving information that the SBU and prosecutors have begun to brutally “work” on my entourage. These are not only threats but also real intimidation and harassment.”

He added: “There is even a case of physical force.”

The People’s Deputy of Ukraine noted that he has been forced to write false public statements and accused the Ukrainian president of a total usurpation of power.

“Often ‘werewolves in the woods’ offer my friends to help me and then call me to a meeting somewhere,” he wrote.

He added: “It is obvious to me that it is a matter of time before they will be able to bring the case to an end, crossing some unprecedented boundary.

“I appeal to members of the public, Ukrainian and foreign media: The war cannot be a reason to turn a blind eye to the arbitrariness committed by the authorities, to the destruction of freedoms and democracy.

“Zelensky and Yermak are on the way to a total usurpation of power with unlimited power over people and resources of the country.”

“If something happens to me or someone from my entourage, I blame it on the above-mentioned scoundrels who insidiously, deceiving Ukrainians, seized power in Ukraine,” he concluded.