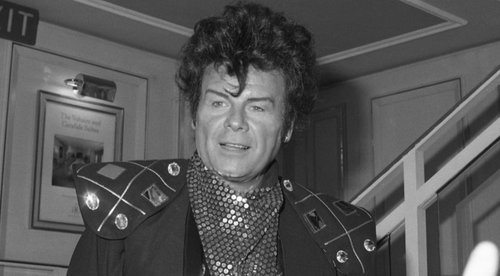 14:08 (February 4) – Gary Glitter is being temporarily housed in a bail hostel while he is fitted with an electronic tag and preparations are made for his move to a new home.

His release from prison was carefully planned by the authorities in an effort to minimise publicity although the location is now known to among others the Daily Mail. It is said to be within a short distance of schools, however, it is not believed to be a concern as he is still partly under surveillance and confinement.

11:24 (February 3) – Gary Glitter has been released from prison after serving just half of his 16-year sentence.

According to a tweet by PA News the disgraced singer was allowed to walk free today although he will remain on the sex offenders list.

#Breaking Disgraced pop star Gary Glitter has been freed from jail after serving half of his 16-year sentence for sexually abusing three schoolgirls, the PA news agency understands pic.twitter.com/OFDz9eWeAT

22:55 (January 4) – The convicted paedophile Gary Glitter, who is due for release from the vulnerable person wing at HMP The Verne on the Isle of Portland, is said to fear for his life.

According to a report by the Mirror on Wednesday, January 4 Glitter is concerned that he will be reclassified prior to his release. That could see him placed in an open prison, where he believes a “psycho” will attack him.

A friend of the former Glam Rocker said: “He’s a coward. He doesn’t want to move because he knows that there’ll be a target on his back.

“He feels safe where he is because it’s a prison for sex offenders. But if he moved he honestly believes some psycho could get to him.”

Glitter, who is now 78, was sentenced in February 2015 to 16 years in prison and is illegible for parole once he has served half his sentence. He is likely to be tagged following release, which will be automatic as his sentencing was for a determinate period.

That means no parole board will be involved in the decision, although they can block a release if they feel the individual poses a risk to the general public. But sources say that Glitter, who was jailed for sex involving girls as young as eight, has been a model prisoner and that he could be released as early as February.

He is said to be within his rights not to leave prison particularly if he believes there is a threat to his life. Unfortunately for him, he is a notorious criminal and everyone knows what he did and paedophilia is not something generally accepted by other criminals serving their sentences.

Although he was found guilty of multiple offences in the late 70s including an attempted rape of an eight-year-old, the judge could not sentence him for longer as he was constrained by laws from the time of the offences.

Glitter´s perversions first came to light in 1999 when he was found to be in possession of child pornography. He was sentenced to four months in prison, but following his release was able to travel to the Far East.

In 2002, he was expelled from Cambodia over unspecified allegations, and in 2006 he was jailed for sexually abusing two girls in Vietnam. Following his release in 2008 he was deported.

Acutely aware of what he did and what that means in prison, Gary Glitter fears for his life should he be moved from the vulnerable person wing that has provided him with a safe haven.